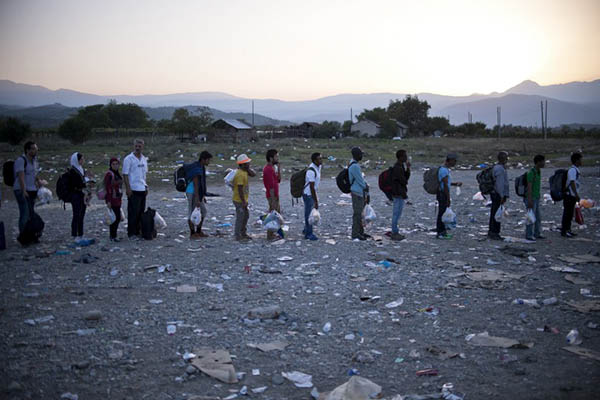 Warnings that jihadists bent on violence may be sneaking into Europe disguised as refugees are growing louder, but analysts say extremists do not need to board rickety rubber dinghies to infiltrate the continent.

Politicians have for weeks been sounding the alarm over the risk of bloodthirsty radicals making their way to Europe undetected in the flood of desperate migrants, and even Pope Francis warned this week of the “risk of infiltration.” While experts say this scenario is not impossible, they argue that groups such as the Islamic State have far more sophisticated means to reach Europe to carry out attacks.

“I think it is a very valid concern from one point [but] the key thing to remember is the group has large numbers of E.U. citizens fighting for it with valid passports who could potentially travel back [to Europe] through conventional means,” Matthew Henman of IHS Jane’s Terrorism and Insurgency Center said. However, he said this would make it more likely the militants could be tracked, while it was virtually impossible to vet refugees for ties to any militant groups. “It is one of the most pressing security concerns facing security officials across Western Europe currently,” he told AFP.

E.U. counter-terrorism chief Gilles de Kerchove in March called for greater vigilance on the bloc’s borders, saying it was “relatively easy to enter into the European Union when one joins an influx of refugees.” And with more than 430,000 migrants crossing the Mediterranean to Europe so far this year—many fleeing war zones in Syria and Afghanistan—rightwing politicians have seized upon this threat.

“At this stage we have no indication that jihadists are mixing with refugees,” a high-ranking French intelligence official said on condition of anonymity. The official said “it is true that jihadists increasingly use land routes to avoid being tracked,” but on the other hand they had “the financial means” to enter Europe by other means than joining the risky migrant route.

Many of those who have carried out attacks on European soil in the name of the Islamic State group or Al Qaeda, have E.U. passports, such as Frenchman Mehdi Nemmouche who attacked the Jewish museum in Brussels in May 2014.

“All the major Islamist groups in Syria and Iraq are currently focused on fighting there and have limited themselves, at least in public, to calling on their supporters who can’t travel to Iraq and Syria [and are] already based in the E.U., to launch attacks in their names in their countries rather than sending people back,” said Henman of IHS Jane’s.

The three Islamist gunmen who carried out attacks in Paris in January that left 17 people dead—most of them at the satirical magazine Charlie Hebdo—had declared allegiance to the Islamic State.

Alain Chouet, a former chief of France’s DGSE intelligence agency, said the threat of jihadists disguising themselves as refugees “does not hold water. It is ridiculous.”

“It makes no sense, in operational terms, for a network to take such risks,” he told AFP. “If the Islamic State was losing ground and wanted to launch an international terror offensive, it would not send its foot soldiers among the refugees: it would take them a month to arrive, with a 50-percent chance of drowning.”

Chouet said the extremist group could afford to send its fighters to Europe “by plane, with a nice ticket, a nice passport and everything in order. They have all the resources, they can always find three morons in our housing estates to carry out the act.”

However the fear is likely to increase the burden on security services already struggling to keep track of known threats. “If you scale that up to the number of refugees arriving and the fact that you have very little information about the identities of these people you get an idea of the scale of the task,” said Henman.

Eric Denece of the French Centre for Research and Intelligence (CF2R) also warned against overstating the threat of disguised jihadists, which could be used by anti-immigrant parties “seeking to barricade Europe.”

“Exaggerating the threat would be completely idiotic, but totally denying it would be false.”