Home Latest News Karachi Could be ‘Wiped Out’ by Tsunami, Say Experts

Karachi Could be ‘Wiped Out’ by Tsunami, Say Experts 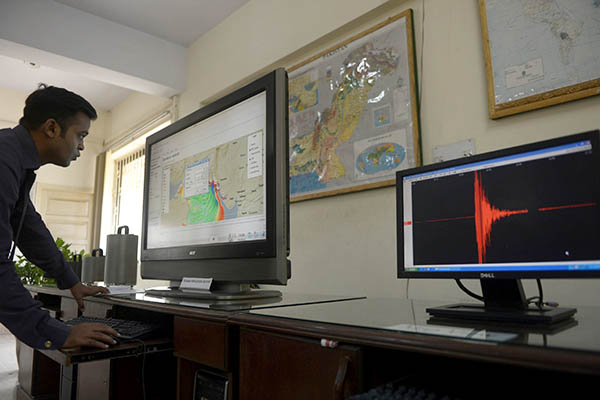 Tests organized by the United Nations measured impact of a hypothetical 9.0-magnitude earthquake in the Makran Trench.

Karachi, home to around 18 million people, could be “wiped out” by a tsunami, officials said Wednesday after a drill simulating a major earthquake in the Indian Ocean.

The tests, including one carried out a day earlier simulating another quake off Indonesia, were designed to check an early-warning system set up after the 2004 Indian Ocean tsunami, which killed more than 230,000 people. The exercise organized by the United Nations was based on a hypothetical 9.0-magnitude quake in the Makran Trench, where the Arabian and Eurasian tectonic plates meet, off the coast of Pakistan.

“This would create waves of 0.9 to seven meters high that could reach Karachi in one and a half hours,” said Tauseef Alam, the chief meteorologist who was supervising the tests. “This could wipe out the city as the waves would be immensely powerful.”

Karachi was hit by a tsunami in 1945 that killed at least 4,000 people, Alam said. A repeat would likely have a devastating effect on Pakistan nationally, since Karachi, the country’s main port, accounts for around 42 percent of national GDP. “The city is vulnerable because there is a chance of another tsunami in the same vicinity but we don’t know when,” Alam said.

In the event of a tsunami, real-time data would be sent to the Met Office in Karachi from Indonesian, Australian and Indian centers. An alarm would sound when an alert was issued and the team would start disseminating the data to around a dozen disaster management departments. “Our goal is to ensure the timely and effective notification of tsunamis, to educate communities at risk about safety preparedness and to improve our overall coordination,” Alam said.

But it is not clear whether Karachi has a tsunami evacuation plan, or whether one would even be feasible in the chaotic, sprawling city. “We will evaluate what works well, where improvements are needed, make necessary changes and continue to practice,” the meteorologist said.

As well as the Makran Trench, Pakistan also straddles the boundary between the Eurasian and Indian plates, and is hit by earthquakes from time to time. A devastating 7.6-magnitude earthquake hit Pakistan-administered Kashmir in October 2005, killing more than 73,000 people and leaving around 3.5 million homeless. And in September last year a 7.7-magnitude hit Awaran district in Balochistan province, killing 376 people and leaving 100,000 others homeless.