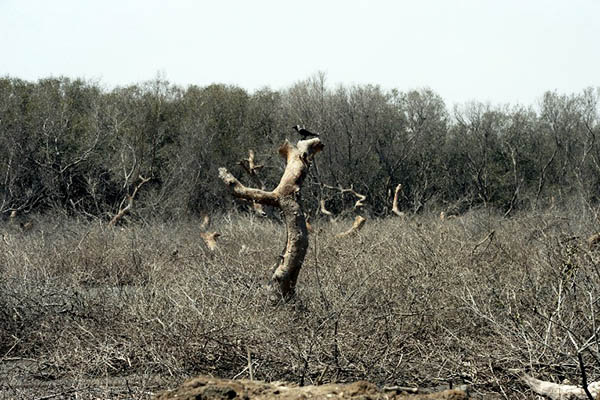 The natural barrier against storms and tsunamis risks collapsing due to illegal logging, pollution and poor irrigation.

Thick mangroves have long protected Karachi from battering by the Arabian Sea, but pollution, badly managed irrigation and years of illegal logging have left this natural barrier in a parlous state. Experts fear that loss of the natural barrier formed by the mangroves could put the city of nearly 20 million people at greater risk from violent storms and even tsunamis.

Close to Karachi, the mighty Indus River ends its long journey from the Himalayas in the sea. The river delta is home to the shimmering green mangrove, a delicate ecosystem that thrives in the mingled salt and fresh water.

Fisherman Talib Kacchi, 50, recalled taking shelter from monsoon storms in the mangroves as a young man. “When there were storms, we would have tied as many as four boats together with the mangroves, and then we would sit, gossip and sing songs,” he said.

But the mangrove is a shadow of its former self—of the 600,000 hectares that existed in the early 20th century, now barely 130,000 hectares remain, according to marine biologist Mohammad Moazzam Khan. The rest has fallen victim to illegal loggers, pollution from nearby industry and changes to the river flow caused by irrigation upstream on the agricultural plains of Sindh and Punjab provinces.

The fishermen, who make a livelihood from the fish and shellfish that shelter in the mangroves, have warned about their decline for years. But a short boat ride from Karachi’s Ibrahim Haidri fish harbor finds plenty of locals cutting the mangrove and carrying it away. Some use foliage as fodder for cattle while others scrape a living by selling branches for fuel.

“I sell one bundle for Rs. 10-20,” said Haji Ibrahim, a frail old man who had just anchored his small boat at the shallow waters of the harbor. Cutting the mangroves is illegal but the maximum punishment for cutting the mangroves is a Rs. 36,000 fine, doubled for habitual offenders, and in any case, prosecutions are extremely rare.

Karachi is Pakistan’s biggest city and economic and industrial heart. The rapid growth of factories has contributed to pollution in the Indus delta. Near a power plant to the east of the city, the mangroves are dry and withered, robbing fish of their spawning grounds and angering Kamal Shah of the Pakistan Fisherfolk Forum.

“I really cannot understand why you would attack the mangrove. It’s stupid—it’s like emptying your neighbor’s stomach to fill your own,” Shah said. “If we were in another country, the mangrove would be valued and protected.”

As well as dissipating the energy of tropical storms when they hit the coast, the mangrove also provides a line of defense in case of tsunamis. The Arabian and Eurasian tectonic plates meet at the Makran Trench, off the coast, and the boundary has the potential to create major earthquakes.

An undersea quake in 1945 generated a tsunami that hit Karachi, killing 4,000 people, and a recent U.N. simulation suggested the city could be wiped out if a big tremor hit again. “It is a very important ecosystem … it is the first line of defense against cyclones, strong surges, tsunami and other natural calamities,” said marine biologist Khan, who works for the WWF wildlife NGO.

But there is some hope. A drive to replant the mangroves in recent years has seen them slowly regain some of the losses. “It [plantation] is going very well. There are very few areas in the world where the mangroves cover is increasing and Pakistan is one of them,” Khan said.