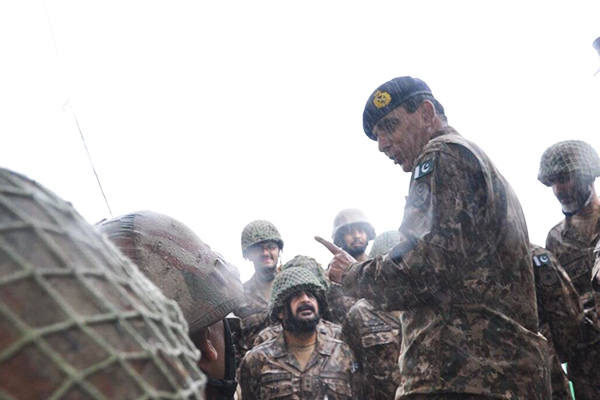 ‘It is time for others to carry forward the mission.’

Gen. Ashfaq Kayani has announced he will retire from service on Nov. 29.

The announcement, made through the military’s Inter-Services Public Relations wing, came on Sunday following a slew of recent reports that the Army chief may be kept on by Prime Minister Nawaz Sharif’s government in some capacity.

“For quite some time, my current responsibilities and likely future plans have been debated in the media with all sorts of rumors and speculations doing the rounds,” Kayani said in the press release. “The subject of being entrusted with new duties has also come up in several reports.” He seemingly puts paid to the possibility of a new assignment: “I share the general opinion that institutions and traditions are stronger than individuals and must take precedence.”

Kayani succeeded former president Pervez Musharraf as Army chief on Nov. 29, 2007. The Pakistan Peoples Party-led coalition government gave him an unprecedented full-term extension in 2010. Kayani’s two terms saw the Pakistan Army resurrect its public standing through its response to natural disasters like the country’s worst-ever floods in 2010 and by keeping itself less visibly involved in governance and politics. But in these six years the Army also faced some of its worst embarrassments, including the discovery and killing of Al Qaeda chief Osama bin Laden in the garrison town of Abbottabad and howling accusations of kidnapping and killing Baloch secessionists and journalists.

Before taking command of the Army, Kayani was the chief of the Inter-Services Intelligence directorate—in which capacity he was involved in negotiations with then-exiled former prime minister Benazir Bhutto. These negotiations culminated in the National Reconciliation Ordinance, the controversial amnesty law which allowed the return of Bhutto and another exiled former prime minister, Sharif. Just weeks after Kayani took over as Army chief, Bhutto was assassinated in Rawalpindi on Dec. 27.

Kayani is also credited for forcing the PPP government to reinstate Iftikhar Chaudhry as chief justice in 2009, but, he has privately said, this was not the case. Kayani fell out with the PPP over the Kerry-Lugar-Berman bill, which committed $7.5 billion to Pakistan in U.S. assistance. The bill was eventually amended to remove perceived Army-taming provisions. In 2011, Kayani and the then ISI chief, Shuja Pasha, openly broke with the government over the Memogate scandal reigniting fears of an Army takeover. (Pasha now lives in the United Arab Emirates.)

“As I complete my tenure, the will of the people has taken root and a constitutional order is in place,” said Kayani in the statement released by ISPR. “The armed forces of Pakistan fully support and want to strengthen this democratic order. The Pakistan Army has made its contribution toward this desired end with complete clarity of mind and a comprehensive understanding of the trajectory Pakistan needs to take.”

He adds: “I have served this great nation and had the privilege of commanding the finest Army of the world for six years to the best of my abilities and with the sincerest of my intentions. It is time for others to carry forward the mission of making Pakistan a truly democratic, prosperous, and peaceful country that embodies the finest dreams our founding fathers had envisaged for us. My tenure ends on Nov. 29. On that day I will retire. May the Almighty Allah help and guide us all.”