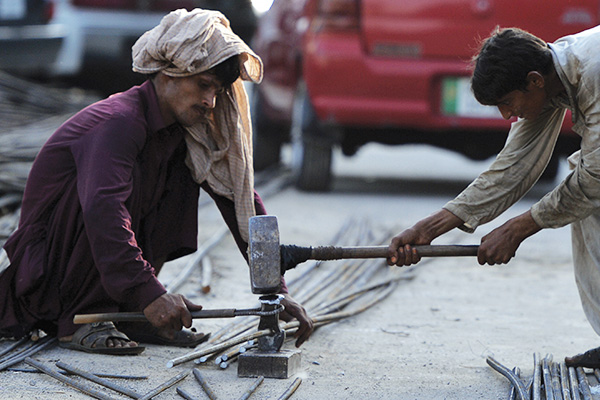 Pakistan’s finance ministry and multilateral financial institutions that support our economy are rejoicing over two facts: the high foreign-exchange reserves, and the low rate of inflation.

The World Bank and the International Monetary Fund combine is both a political and monetary conglomerate. At the most basic level, the combine must serve its political subscribers; at a more general level, the combine must impose such policies on recipient countries, like Pakistan, that enhance the probability of repayment of foreign loans. The reality is that our rising reserves situation is the result of large foreign borrowings, and the low inflation rate is because of declining global oil and gas prices.

To be sure, there is a clear disconnect between the finance ministry and the World Bank-IMF’s celebrations and the everyday reality confronting the Pakistani people, between the players and the people. If you are unemployed or underemployed, high foreign-exchange reserves and the low inflation rate are practically meaningless.

What do the Pakistani people require? That would be gainful employment (i.e., consistent work and payment), an end to power outages, and fair taxation.

As a “youth bulge” country, Pakistan currently has a working-age population of some 100 million, nearly half its population. Most of our labor force works less than 35 hours a week, thus qualifying as underemployed. By 2050, our population is expected to hit 363 million. In order to stave off rebellions and disorder, Pakistan will need to create at least 2 million new jobs a year and achieve an annual GDP growth rate of 7 percent. This is a tall order.

The Pakistan Muslim League (Nawaz)’s 2013 election manifesto made 42 specific promises about the power sector. Since coming into power over two years ago, reality has been a rude response to the PMLN government’s resolve. All key performance indicators are deteriorating, not improving. Among others, this is evident from the circular-debt figures—up from Rs. 411 billion in 2013 to Rs. 633 billion as of June 30, 2015.

Pakistan’s is far from a fair-taxation regime, the cornerstone of justice. The indirect taxation component of our Rs. 2.7-trillion tax pool for the current financial year is 57 percent. This regressive taxation (the lower your income, the more taxes you pay) is hardly fair. If your electricity bill is Rs. 20,000, about 40 percent of this is taxes; if your landline phone bill is Rs. 3,000, about 30 percent is taxes; if you buy high-speed diesel, the ad valorem tax is 45 percent.

At the same time, domestic and foreign investors are keeping their wallets shut. As of June 30, private-sector debt growth came in at Rs. 149 billion, down 54 percent from Rs. 325 billion in the previous financial year, and Foreign Direct Investment, which peaked at $5.4 billion in 2007-2008, has hit a 13-year low of $709 million.

The great disconnect among the principal stakeholders of the Pakistani economy is higher than ever before. If this isn’t quickly and meaningfully gapped, the finance ministry and foreign lenders will have little left to celebrate about.