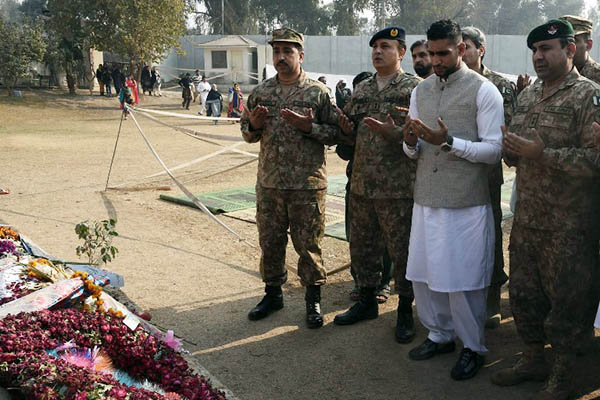 Boxer hopes his trip will inspire children to return to school in Peshawar.

The WBC welterweight world champion, who has Pakistani roots, has pledged to help rebuild the Army-run school, the scene of Pakistan’s deadliest ever terror attack. He offered prayers at a memorial to the dead at the school gates and said he wanted to visit the city despite security concerns to show solidarity.

“The main reason I’ve come to Pakistan was to come to Peshawar and see the parents and the children and give the children the confidence to go back to school,” he told reporters. “My heart goes out to the families and the parents whose children died.”

The attack this month shocked the world and prompted Pakistan’s political and military leaders to vow decisive action to stamp out militancy. Khan, 28, said the country must pull together to prevail.

“We have to stop terrorism and with the help of the Army and the people of Pakistan we can stop it,” he said.

Last week the boxer announced he would be setting up Amir Khan academies for young people in selected cities across Pakistan. Through his foundation, he would support Pakistani children in the health and education sectors. He also plans to auction a $45,000 pair of shorts to raise money to help rebuild the school.

Khan wore the flamboyant shorts, which included a waistband made from 24-carat gold threading, during his successful WBC title defense against Devon Alexander in Las Vegas this month.