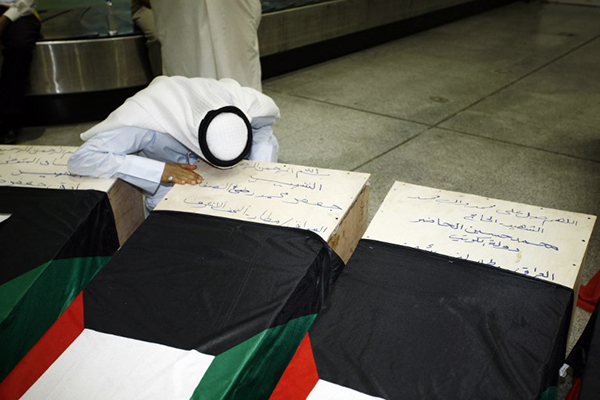 Emirate has tightened security at mosques.

After a series of arrests in connection with the Shia mosque blast on Friday that left 26 dead, Kuwait has identified the suicide-bomber as a Saudi national.

The attack also wounded 227 worshippers in the first bombing of a mosque in the tiny Gulf state, and Kuwait’s security services have vowed to catch and punish those responsible.

The Islamic State militant group’s Saudi affiliate, the so-called Najd Province, claimed the bombing and identified the assailant as Abu Suleiman al-Muwahhid. Kuwait’s Interior Ministry gave the real name of the attacker as Fahd Suleiman Abdulmohsen al-Qaba’a, in a statement carried by Kuwait’s official news agency. It said that he entered the country through Kuwait Airport at dawn on Friday, the same day of the bombing. A handout photograph of Qaba’a shows a young bearded man wearing a traditional Saudi headdress.

Earlier on Sunday, the ministry said that security services arrested the driver of the car that transported the bomber to the Al-Imam Al-Sadeq mosque in Kuwait City. He was named as Abdulrahman Sabah Eidan Saud and described as an “illegal resident” born in 1989.

Authorities on Saturday arrested the car owner, Jarrah Nimr Mejbil Ghazi, born in 1988, and also listed as a stateless person. Kuwait has also detained the owner of the house where the driver was staying. He was described by the Interior Ministry as a Kuwaiti national who subscribes to “extremist and deviant ideology.”

“Illegal resident” is the official term used in Kuwait to describe stateless people, locally known as bidoons, who number around 110,000 and claim the right to Kuwaiti citizenship.

Alleged I.S. executioner Mohammed Emwazi, who became known by media as “Jihadi John,” was born in Kuwait to a stateless family of Iraqi origin which later moved to London.

Local media said 18 of those killed in the Friday bombing included three Iranians, two Indians, one Pakistani, one Saudi, and one bidoon.

The breakthroughs in the bombing probe came a day after thousands of Kuwaitis braved the summer heat on Saturday to attend the funerals of 18 victims. Mourners turned out in large numbers for the funerals despite Ramzan.

“This crowd is the proof that the objectives of the criminal act have failed,” Parliament speaker Marzouk al-Ghanem told reporters.

The mourners, who included women, carried Kuwaiti flags and black and green banners bearing religious slogans. The Health Ministry said that 40 wounded are still being treated in hospital.

In Iraq, relatives wept as the coffins of the eight remaining victims arrived and were taken inside the airport terminal at Najaf. They were buried at dawn on Sunday in Najaf’s Wadi al-Salam cemetery.

“We want to deliver a message to Daish [an Arabic acronym for I.S.] that we are united brothers among the Sunnis and Shia, and they cannot divide us,” said Abdulfatah al-Mutawwia, a Kuwaiti living in Iraq who lost his brother in the bombing.

Tens of thousands of people headed by the emir offered condolences late Saturday to relatives of victims at Kuwait’s Grand Mosque, the largest place of worship for Sunni Muslims, in a show of solidarity. The cabinet announced after an emergency meeting on Friday that all security agencies and police had been put on alert to confront what it called “black terror.”

Justice and Islamic Affairs Minister Yacoub al-Sane said additional security measures will be taken around mosques and places of worship.

The emir, government, parliamentary and political groups and clerics have all said Friday’s attack aimed to stir up sectarian strife in the emirate.