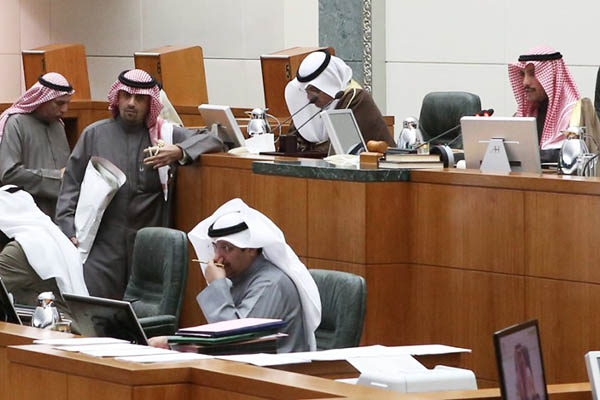 Kuwait’s Shia lawmakers boycotted parliament Wednesday, a day after a mass sentencing of members of the minority to prison or death for belonging to an Iran-linked cell.

All nine Shia M.P.s stayed away from the national assembly, which held a secret debate on the impact of regional conflicts on Kuwait, following attacks on Sunni-ruled ally Saudi Arabia’s diplomatic missions in Iran. One of them, Saleh Ashour, said: “The anger of Kuwaiti Shias has reached its peak in recent days with followers of a complete sect” being accused of acting as “agents for Iran and being members of [Lebanese Shia militia] Hezbollah.” At the same time, authorities are failing to take action against people taking part in fighting in Iraq and Syria, Ashour said on Twitter, a reference to members of Sunni jihadist groups.

Abdulhameed Dashti, another Shia legislator, wrote on Twitter that he was boycotting the 50-seat parliament for the day.

“They are sending a message which we reject. Court verdicts must be respected,” said Azemi, who also called on the government to expel the Iranian ambassador.

The unprecedented boycott comes after a lower court on Tuesday sentenced 22 people, all but one of them Kuwaiti Shias, who were charged with spying for Iran and plotting attacks in the Gulf country.

Two defendants, including an Iranian tried in absentia, were sentenced to death while 19 were handed jail terms ranging from five years to life. Another was fined 5,000 dinars while three were acquitted.

The court said the cell members had links with Hezbollah and the Iranian Revolutionary Guards.

Shia Muslims form around 30 percent of Kuwait’s native population of 1.3 million. The oil-rich emirate has witnessed a rise in sectarian tensions due to regional strife.

Following the debate, parliament said it rejected practices that “undermine the security of Gulf Cooperation Council,” and expressed “total and unlimited support for Saudi Arabia.”

Kuwait recalled its ambassador from Iran to protest the attacks on the Saudi missions, and summoned Tehran’s ambassador to express its disapproval. The attacks, carried out by protesters angry at Saudi Arabia’s execution of prominent Shia cleric Nimr al-Nimr, prompted Riyadh to cut diplomatic ties with Tehran.