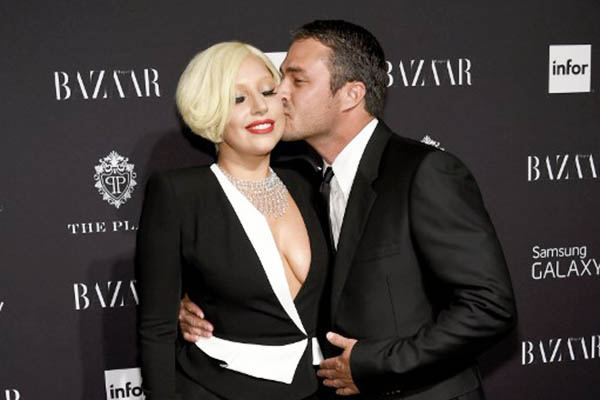 Pop star has announced that she is getting married to actor Taylor Kinney.

Pop diva Lady Gaga announced to the world on Monday that she is getting married—to an actor she met making a video, in which she wore her mother’s wedding dress.

The 28-year-old superstar, who has become as known for her extravagant outfits as for her music, revealed the engagement by showing a simple, heart-shaped ring that fiancé Taylor Kinney gave her. “He gave me his heart on Valentine’s Day, and I said YES!” Gaga said in a caption to the picture she shared with her 5.5 million followers on Instagram.

Gaga met Kinney in 2011 when filming the video for “You & I” in the open fields of Nebraska. Despite the romantic title, the video was full of disturbing imagery including simulated torture of Gaga. In a foreshadowing of the relationship to come, Gaga revealed that she wore her mother’s wedding dress for the video. It also showed Gaga—clad as a mermaid—having sex with Kinney.

Kinney popped the question to Gaga, an Italian American whose real name is Stefani Germanotta, over a Valentine’s Day dinner at the New York restaurant Joanne Trattoria which is owned by her parents, according to celebrity magazine Us Weekly.

Kinney, 33, has acted in a range of television shows, such as Chicago Fire, and films. He had a recurring role on the television series The Vampire Diaries and played a Navy SEAL in Zero Dark Thirty, Kathryn Bigelow’s controversial thriller about the killing of Osama bin Laden.

Gaga started off in the New York underground before her 2008 debut album The Fame, with its infectious dance sound and her racy persona, became an unexpected global smash hit. Her success was fueled by the popularity of her song “Poker Face,” in which Gaga hints at her bisexuality and boyfriends’ struggles to understand it.

Gaga became known for her sexually charged live shows as well as her outrage-inducing attire, including a dress made of raw meat that she wore to the MTV Video Music Awards in 2010. More recently, Gaga has sought to show herself as more than a sensational persona. She has teamed up with 88-year-old Tony Bennett for an album of jazz standards, Cheek to Cheek, accompanied by a tour with little of her past on-stage theatrics.