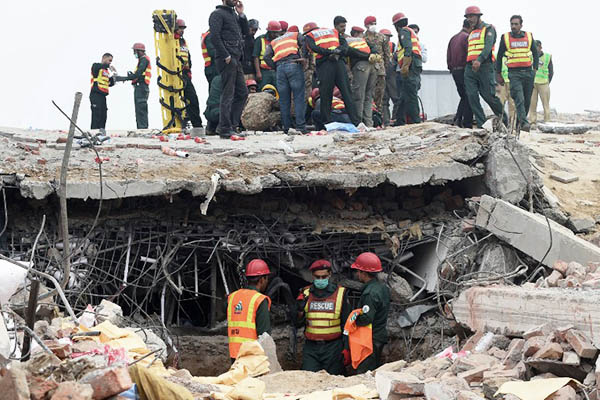 Rescue official says they expect to find at least another 25 bodies as they continue clearing rubble.

Rescue crews resumed digging through the rubble of a collapsed factory in Lahore on Friday as officials said they expected to find at least two dozen more bodies, with the death toll standing at 23.

More than 100 survivors have already been pulled from the debris of the four-storey Rajput Polyester polythene bag factory after it came crashing down on Wednesday evening, trapping dozens of people inside. But hopes were fading for anyone left alive as rescuers scrabbled through the debris.

“We have recovered up to 23 dead and more than 100 injured so far. There are less chances of finding more injured under the rubble but we are looking for dead bodies,” said Arshad Zia, head of rescue services in Punjab.

Soldiers and rescuers were preparing to clear the rubble in front of the factory and move toward the rear of the building where they fear they will discover more victims. “We expect to find at least 25 more bodies in that part of the factory,” Zia said.

Punjab Chief Minister Shahbaz Sharif has said the factory may have suffered structural damage in the Oct. 26 quake, which killed almost 400 people across Pakistan and Afghanistan. Provincial labor minister Raja Ashfaq Sarwar said that an enquiry into the collapse “is being conducted and we will probe all angles,” with a report to be submitted within two weeks.

At least 24 people died last year when a mosque collapsed in the same city, while more than 200 people lost their lives, mostly due to collapsed roofs, following torrential rain and flooding in 2014.