Home Culture #LLF2015 Day One, In Your Words 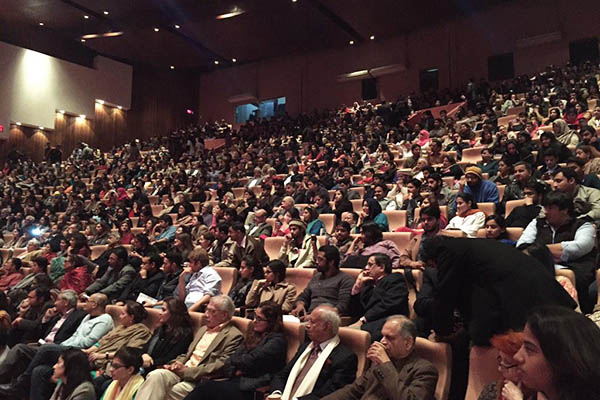 Despite the downpour, tens of thousands flocked to the inaugural day on Friday of the third Lahore Literary Festival for intellectual respite, queuing patiently in the rain to attend the day’s 15 scheduled talks featuring a host of local and foreign luminaries, including historian Romila Thapar, actor Naseeruddin Shah, columnist Roger Cohen, and author Mohsin Hamid.

The festival officially kicked off at 11 a.m. with Iqbal Z. Ahmed, chairman of the LLF Board of Governors, and Nusrat Jamil, president of the LLF Advisory Board, welcoming delegates in Hall 1 and declaring the festival open. This short ceremony was followed by Ayesha Jalal introducing Thapar, whose keynote address received a standing ovation.

LLF is being supported by the Punjab government, which provided several layers of security at the newly refurbished Alhamra Arts Center (which now has ramps for wheelchair access to four of the five halls where LLF sessions are taking place).

Undoubtedly beat time of the year. #Lahore is never this happening. #Rain is in the year as #LLF2015 is all set to kick start shortly.

Despite torrential downpour, Lahoris turn out in large numbers for #LLF2015. The fun begins!

Standing ovation for Romila Thapar as she concludes. #LLF2015

Lahoris divided on the weather but agree on the brilliance of the #LLF2015. @lhrlitfest

Session on restoration of old Lahore underway along with a documentary being displayed #LLF2015 pic.twitter.com/vCuElenN4A

There's a huge crowd here to listen to @mohsin_hamid talk about his latest book accompanied by Razia Iqbal Brilliant!! #LLF2015

#LLF clearly going from strength to strength. Venue spruced up, brand new seats in auditorium and whole place already heaving on day one.

Security at #lahoreliteraryfestival might just be there to save volunteers closing doors for Naseeruddin Shah session pic.twitter.com/IKjwb2bN9C

WOW! What a great kick-off of Lahore Literary Festival.

If you are in Lahore or nearby, attend the #LLF2015. pic.twitter.com/EHujECois4

There should be more events like #LLF2015 , to give this highly polarized society sanity and softness.

A little sampling of the day's final event, a set by Poor Rich Boy pic.twitter.com/ivwpcS9nhn

Lahoris literally poured in at @lhrlitfest as hard as the rain did earlier today. Delightful Sight. #LLF2015 pic.twitter.com/LbXaXdj06G

just came back from #LLF2015 it was amazing and well organised.security was extraordinary and all halls were packed