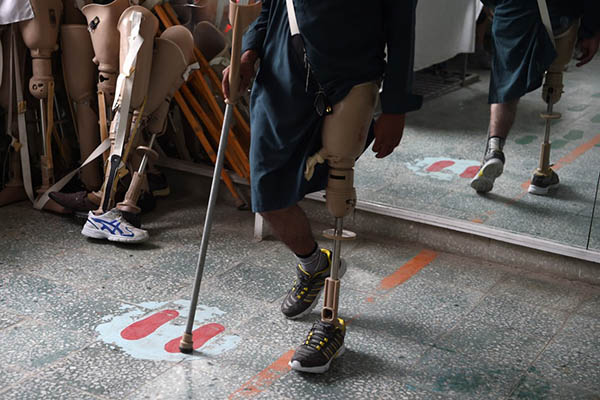 An Afghan man walks with prosthesis after losing one of his legs in a landmine explosion. Wakil Kohsar—AFP

U.N. agency reports causalities from landmines have soared five-fold between 2012 and 2017

At a rehabilitation center in Afghanistan, Imran Gul clasped two parallel bars, cautiously easing his weight onto his new leg. The 25-year-old nomad had been driving a tractor on hilly farmland when a landmine exploded, making him the latest victim of a scourge that has worsened in recent years as fighting intensifies between the government and the Taliban.

“I did not hear the sound of the bomb,” Gul said as he tried out his prosthetic limb. “I touched my leg and saw there was no leg, and there were pieces of shrapnel in my eyes. My hands were soaked in blood,” he added.

The blast in the eastern province of Ghazni also took two of Gul’s fingers.

According to the United Nations Mine Action Service (UNMAS), casualties from landmines and so-called “explosive remnants of war” have soared five-fold between 2012 and 2017, the last year full data was available. Casualties have increased as a result of the intensifying fight between the Afghan government and the Taliban, especially since 2014.

Battlefields have been left strewn with landmines, unexploded mortars, rockets and homemade bombs—many of them picked up by curious children.

“We are struggling to handle significant increases in the number of minefields in Afghanistan,” said Patrick Fruchet, the UNMAS program manager in Kabul.

The Afghanistan government has signed an international anti-landmine treaty, but the Taliban and other militants are bound by no such rules.

The U.N. hopes to raise attention to the issue on Thursday, the annual International Day for Mine Awareness and Assistance in Mine Action.

“In 2012, we were down to about 36 casualties [killed and wounded] per month in Afghanistan—which is still enormous,” said Fruchet. But those numbers have jumped. In 2017, there were more than 150 casualties a month.

In addition to the new explosive detritus, Afghanistan is still grappling with the legacy of mines from the Afghan-Soviet war in the 1980s and the civil war in the 1990s.

Mohammad Jamshidi, UNMAS deputy program manager, said that a lack of funds means the country will probably miss the U.N. goal of being mine-free by 2023. The “deadline seems to be difficult to achieve because all these new contaminations and the lack of sufficient funding for the mine action,” he said.

Hashmatullah Yadgari, who works for the Danish Refugee Council, said many Afghans—particularly returning former refugees—have no idea what landmines and other explosives even look like. People “do not have any information about it,” Yadgari said.

In a tent inside a refugee camp on the outskirts of Kabul, a family was recently shown the various types of explosive device they may well encounter. “We had no knowledge and awareness about the landmines,” said Sakina Habibi, a mother of three who has just returned to Afghanistan after nearly 30 years in Pakistan and Iran.

Many survivors of blasts go to one of seven orthopedic rehabilitation hospitals funded by the International Committee of the Red Cross (ICRC). At the same rehab center where Gul, the nomad who lost a leg, was being treated, other patients tried out their new prosthetics.

Abdul, an Afghan mine clearer who only gave his first name, stood unsupported for the first time since getting fitted with two legs. He was disarming mines hidden in a house recaptured from the Taliban five months ago when the blast happened. “I deactivated five pressure mines. The sixth was designed to explode when exposed to light. When I moved my lamp closer—boom,” Abdul said. “I did my job, I prevented people from being killed by these mines. Even though I lost my legs, I’m lucky to still be alive,” he added.

The resilient father of two wants to keep his job “to again save lives,” he said, mimicking holding a mine detector in one hand and a walking stick in the other.

Of the 12,000 new patients received annually by the ICRC, between 1,500 and 2,000 are casualties of war, some four-fifths of whom are wounded by landmines, said Najmudin Helal, head of the Kabul center.

Aside from physical rehab, the center works with patients to help them find a new place in society. Nearly half of the 300 staff at the Kabul hospital are disabled. “They learn easily and they can teach the new disabled easily. It’s a hope [for new patients] to see that life carries on,” Helal said.