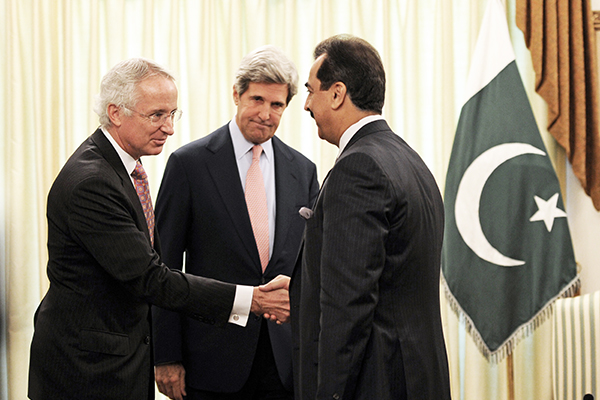 The new U.S. ambassador to Islamabad‚ Dr. Cameron Munter‚ spoke with Newsweek recently about the challenges that come with his new position. Excerpts:

The third U.S.-Pakistan Strategic Dialogue concluded last month and while there’s enthusiasm in Islamabad about this moving forward‚ there doesn’t appear to be much popular support for a closer relationship with the U.S. Does this concern you?

We should take this head on. Our Strategic Dialogue‚ which talks about real issues in a way that our partnerships with other major allies often don’t‚ is quite substantive and addresses very specific ideas on agriculture and water‚ energy‚ health. These are things that are truly relevant to the day-to-day [in Pakistan] and it really does mean to us that we have competent and engaged interlocutors. So if that means we have this kind of [special] relationship—if it means that our president sits down with your leaders and he says very clearly he wants to come on a significant visit to Pakistan‚ and that he wants to invite the president of Pakistan to the U.S., all of these things‚ in the diplomatic world‚ are very significant. So if that’s the case‚ why is it that there is this widespread skepticism? What we have been able to do is to explain what we are doing‚ explain we’re spending money on these kinds of projects‚ and explain we’re fighting terrorism together. But what I sense we have not been able to explain to the Pakistani people is why … The whole point of this Strategic Dialogue‚ the five-year length of Kerry-Lugar-Berman‚ the long-term military commitment to train and fund the Pakistani military‚ is to get past earlier mistakes. It’s to say‚ this is a partnership that’s supposed to go on for a long time.

Given the depth of the skepticism‚ will putting out a message of this kind work?

Our message has to be tied to measureable things. We have to have agricultural projects‚ where the Pakistani people are aware of the techniques and the training [we are providing]; of the wells and dams we may be building. So it has to be a mixture of message and deed. From the people I’ve talked to‚ I think there is actually a deep empathy for the United States‚ in a funny way. One of the reasons that there is this skepticism about the United States is that Pakistan has high expectations of us.

U.S. drone strikes in Pakistan have increased under the Obama administration and are widely resented here. How do you view this fallout‚ and would it help giving over control of the drones to Pakistan?

The way to look at this is that there is a very real [terrorist] threat. Look at the lives that have been lost in Pakistan. There have been thousands of soldiers killed. Many more thousands wounded. And civilians‚ of course‚ many more than that. The efforts that the Pakistani military has made‚ in Khyber-Pakhtunkhwa and elsewhere‚ are significant. We understand that the Pakistani leadership understands this is a tough challenge. Everyone is fighting as best they can. Everyone is using the technology that is most effective to deal with this really existential threat—a threat to the people of Pakistan‚ and a threat to the people of America. So even if there are issues about the way the war is fought‚ we just have to remember the context. We’re in a very difficult fight. And we all have to contribute as best we can. I’m not an expert on this‚ so I don’t know whether there is a technical fix. I just know that what we have is a common goal to fight against these terrorists. And the way we’re doing it is the way we know best.

A military operation in North Waziristan is becoming a contentious issue between Pakistan and the U.S. How close are we to resolving this?

We have very close talks about how we can help each other fight the terrorist threat‚ and we believe the efforts that everyone is making are taking a toll on the terrorists. The issue of how the Pakistani military deals with this very real problem is something that we discuss very closely. We’re trying to make sure that we do two things: not only to rid ourselves of the terrorist threat‚ but to make sure that the world that follows the war that is taking place in Afghanistan is one that not only has a stable and prosperous Afghanistan‚ but a stable and prosperous Pakistan … And there should be no doubt that in the Afghan-led talks about reconciliation‚ there is a role for Pakistan.

There is talk of the Leahy Amendment being invoked to stop aid to a particular unit of the Pakistan Army alleged to have been involved in the summary executions of suspected militants in Swat. Was this discussed at the Dialogue?

We did discuss it. One thing is very clear: we are committed to human rights around the world. And when we have fallen short of our aspirational goals‚ we have done our best to clean up afterwards. We realize that some people think of these extrajudicial killings as somehow America lecturing other countries about their behavior. We’re aware that in these kinds of situations‚ terrible things happen … Right now‚ we have credible reports that we’re investigating‚ and we believe that the authorities in Pakistan are also investigating whether or not this has happened‚ why‚ and who has done it. We are satisfied that the Pakistani government is serious in its investigation. Sen. Leahy also believes we are in compliance‚ at this point‚ with the Leahy Amendment.

Civil-military relations in Pakistan seem to have swung back in favor of the military. How do these power dynamics affect the U.S.’s strategic objectives?

The strategic goals have a military element‚ and they have a civilian element. You have a Constitutional system here that we try as best we can to support‚ and we want to make sure that through our assistance we strengthen the capacity of the civilian and constitutional government to be effective‚ to function. We also support the role of the military to protect the people of the country‚ as it should. Everything we do in our assistance is meant to try to make sure that we support—not dictate—the ability of civilian and military authorities to play the role they should. We don’t take sides.

How do you persuade Pakistan to overcome its long-term nervousness over India and focus instead on “AfPak”?

The main thing we’re looking at‚ not only with this $2 billion which is part of a multiyear support program‚ is to make sure that the legitimate defense needs of Pakistan‚ as defined by Pakistan‚ are met. We have our suggestions on how we can work together‚ but Pakistan decides Pakistan’s defense needs. We want to make sure these needs are met‚ because we believe that a regional balance in this part of the world is crucial. So if there is any way that we can encourage Pakistani and Indian conversations about how to make sure there is less tension in the region‚ we will do it‚ we will do everything we can.

Is another F-16 deal on the table?

I don’t know of another deal. But if the legitimate needs of Pakistan involve frigates‚ fighter aircraft‚ counterterrorism equipment‚ other things‚ we stand ready to work in the context of our common fight against terrorism and our common commitment to regional stability.

What would you say to people here who believe that private security contractors like Blackwater are present in Pakistan and working to undermine the state?

I’d tell them it is bullshit.