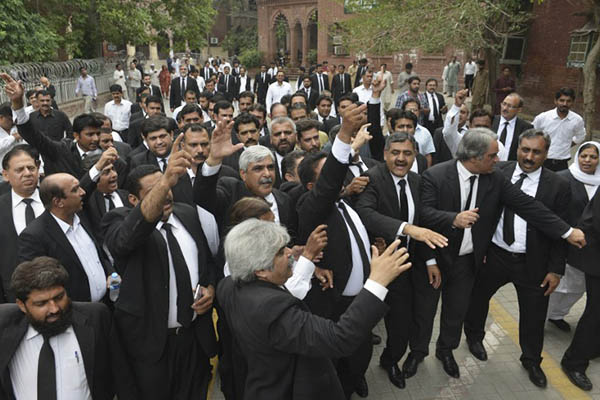 Bombing claimed by both Jamaat-ul-Ahrar and Islamic State has left 70 dead, 112 injured.

Lawyers across Pakistan said they would boycott court proceedings throughout on Tuesday in protest after a suicide bomb killed 70 people in Balochistan, including many from the legal profession.

Monday’s attack on a hospital in Quetta was one of the deadliest in the country’s long battle against militancy. The explosion came as some 200 lawyers along with journalists had gathered at the Civil Hospital to mourn the fatal shooting of a top provincial lawyer, with witnesses describing horrific scenes as medics battled to save scores of wounded.

“Lawyers throughout the country will boycott court proceedings on Tuesday in protest against the killing of lawyers in Quetta yesterday,” said a statement from the Pakistan Bar Council, adding that provincial and district bar councils would follow suit.

Balochistan government spokesman Anwar-ul-Haq Kakar said schools in the province would also be closed on Tuesday “to mourn the loss.” Funerals have already been held for many of the victims, he said. “Those who were living in and close to Quetta city have already buried their loved ones, while those belonging to far flung areas will be buried today,” he said.

On Monday officials had put the number of wounded at 112. Twenty-seven of the critically injured were airlifted to Karachi, where a spokesman for the Aga Khan Hospital said they are “out of danger now.”

The attack has been claimed by a faction of the Pakistani Taliban, Jamaat-ul-Ahrar, and the Islamic State group (I.S.). Ahrar, which formed in 2014, has also claimed responsibility for Pakistan’s deadliest blast so far this year, a bombing in a crowded Lahore park on Easter that killed 75, among other attacks.

The U.S. State Department designated Ahrar as a terrorist group last week in a statement that described it as “a splinter group of the Tehreek-e-Taliban Pakistan (TTP) based in the Afghanistan-Pakistan border region.”

Hours after the Ahrar claim the Islamic State group also claimed the attack, saying it had killed 200 people, according to the SITE monitoring group. Middle Eastern jihadist group I.S. has been scrabbling for purchase in Pakistan, largely due to competition from well established extremist groups such as the Taliban.

Balochistan, which borders Iran and Afghanistan, has major oil and gas resources, but is afflicted by Islamist militancy, sectarian violence between Sunni and Shia Muslims and a separatist insurgency.

In a tweet, Pakistan Army spokesman Lt. Gen. Asim Bajwa said the attack was “specially targeting CPEC,” referring to China’s ambitious $46 billion project to build an economic corridor through Pakistan. The China-Pakistan Economic Corridor is set to culminate in the Baloch Arabian Sea port of Gwadar, south of Quetta.