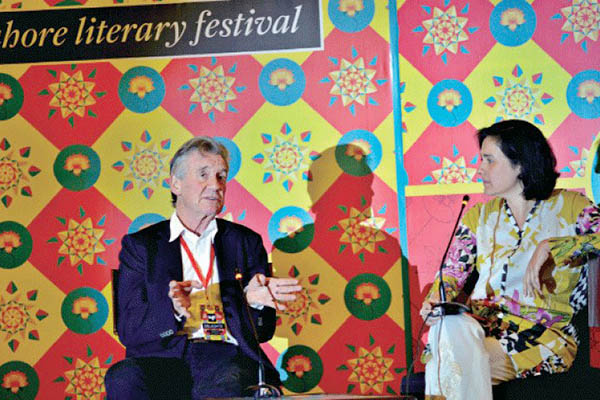 Beset by security concerns, a truncated one-day schedule and last-minute venue shift was no barrier to the Lahoris who swarmed Faletti’s Hotel for the fifth annual Lahore Literary Festival on Saturday.

Waiting w/ bated breath & stuffed parrot for Michael Palin. Had I a hat, I'd be doffing it to #LLF2017 for pulling things off with aplomb.

"Its fitting that #Pythonesque celebrates the absurd. We should do that more it's a much saner approach to understanding reality' #LLF2017

I have to say satire has not suffered from Trump coming to office: Michael Palin #LLF2017

#LLF2017's first session opens to a packed to capacity Hall 1. I love this city. #Lahore

First person to stop by the DWL #LLF2017 stall today: the brilliant @tejucole – Here he is, with his copy of Papercuts Vol. 15. pic.twitter.com/vJCaYuY2hJ

Katie Hickman is telling us about the 1st Englishwomen to go out to India @lhrlitfest #LLF2017 @PindarDiamond pic.twitter.com/7mJR5k5oP5

The #LLF2017 is absolutely lit. Been here a half hour and have already heard Margaret Macmillan talk like the godfather.

Ahmed Rashid – too much tweeting substitutes for real news & make it difficult to write narratives needed to understand complexity.#LLF2017

Start your morning with a Python and @kamilashamsie. The rest of the day can't go wrong. #LLF2017

Who Belongs Where? Mohsin Hamid and Teju Cole at @lhrlitfest #LLF2017

I'M SO EXCITED ABOUT THIS pic.twitter.com/T2eunQ2I4d

Do you write for people at home or foreigners? Question asked of writers of colour. @tejucole and @mohsin_hamid in conversation at #LLF2017

Good to see literary festivals such as #LLF2017 taking place in #lahore – best of luck to all the participants and organizers! @lhrlitfest

Please make sure recipes are hidden, incase of a nuclear war. It would be terrible to lose the recipe of Biryani: Teju Cole #LLF2017

The many shades to the legend, Dr. Adeeb ul Hassan Rizvi ~ the student leader. the rebel. the romantic. the helper #LLF2017 pic.twitter.com/Y7UptBlEKV

Daniyal is a little in love with Crystal- the protagonist in his upcoming bildungsroman "This is Where the Serpent Lives"#LLF2017 pic.twitter.com/uqNTZqmMAY

A drone flies up to the stage in the middle of the session. Molly Crabapple: What is this dystopia we live in?! The drone retreats. #LLF2017

Mohsin Hamid re: becoming a writer: I felt an enormous desire to communicate something I felt it was very difficult to communicate. #LLF2017

To make art is a form of love and defiance, says @mollycrabapple at #LLF2017 @lhrlitfest pic.twitter.com/AhBAlpAlPI

#pakistan many worry how will pakistan survive what is more remarkable How it has survived ? #ayeshajalal #LLF2017

What the hell is going on this world&what can the literary world do about it? Dwight Garner opens the panel #LLF2017 pic.twitter.com/T7F7wdOhm0

How wonderful. Dr Adeeb Rizvi has done so much for Pakistan!

"This might be very elitist of me, but my books are for people who read books," says Teju Cole. Audience teetering away. #LLF2017

One liner on #LLF2017:
"Better to do something imperfectly than to do nothing perfectly."
Lahore needs events like LLF.

#llf2017 here we are pic.twitter.com/JtTBrQZlzw

Just like every year! Thank you, #Lahore! #LLF2017 https://t.co/reVRWcMUSs

The sparkling lights of #Lahore from the skies above….#LLF2017 pic.twitter.com/fsnnZC2U13

Michael Palin talking with great tenderness of his time in Peshawar and Chitral. #LLF2017 #loveaffaircontinues pic.twitter.com/owaYAwFFfA

What a triumph #LLF2017 has been. Kudos @razi_ahmed_ @lhrlitfest and the booksellers and audiences. Oh, and maybe the speakers also.

And that concludes it. Thanks @lhrlitfest for a wonderful event! #LLF2017 pic.twitter.com/A2QirpBw8O

To sum up, there's nothing @lhrlitfest can't do. Here's to five years of the best gift to the city of Lahore. #LLF2017

A great big shout out to the #LLF2017 team for reflecting what is best about this country in the worst of times.