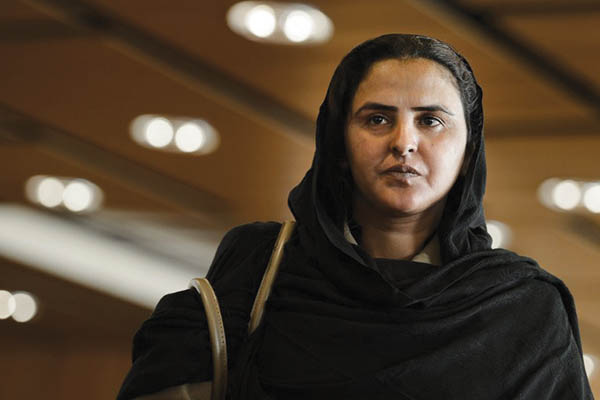 To those who complain that opera is an elitist indulgence served up to snobs in dinner jackets, New York’s latest world premiere may come as something of a shock.

Inspired by the horrific gang rape of illiterate Pakistani woman Mukhtaran Mai on orders of a village council, Thumbprint is a $150,000 production currently having an eight-night run in a basement theater in Manhattan.

One of the most infamous sex crimes against women in South Asia, Mai’s 2002 rape, survival and metamorphosis into an international rights icon is as far removed from opera-house pomp as possible. It may have earned a less-than-glowing review from The New York Times—“muted,” “not quite enough”—but the score is an alluring blend of South Asian and Western music, and the production starkly innovative. With a simple backcloth doubling up as a film projection screen, a few chairs and charpoys, the simple but powerful staging evokes the heat, the dust and the traditions of a Pakistani village.

Mai, now in her 40s, was raped to avenge her 12-year-old brother’s alleged impropriety with a woman from a rival clan. Six men were sentenced to death for her rape in a landmark ruling. But five were later acquitted and the main culprit had his sentence reduced to life imprisonment: facts the opera omits. There is no staged recreation of the rape, which is instead portrayed by muffled shrieks of terror interspersed with a knife slashing open bags of sand.

Mai’s story has fresh resonance since the brutal gang rape of a student on a New Delhi bus and her death a little over a year ago sparked international outrage about the levels of violence against women in India.

“It’s inspiring,” said the opera’s Indian-American composer Kamala Sankaram, who also sings the lead role. “This is a person who was completely illiterate and knew nothing of her rights and the laws of her country and yet she had the courage to step out,” she said.

Sankaram worked to recreate Mai’s world by combining Hindustani music, Western composition, qawwali and Bollywood. “I am a sitar player as well as being a Western musician so I wanted to bring in elements of traditional culture but still keep it something acceptable to Western listeners,” she said.

Pakistan may be thousands of miles from New York but playwright and novelist Susan Yankowitz, who wrote the libretto, says the opera is about courage and universal vulnerability of women. “The main question that is repeated throughout the opera is where did you find your courage … In a dry season, someone must be the first drop of rain,” she said. “The courage is to be the first drop of rain and that’s what I hope people will take away from it and inspire people to take some action they would otherwise not have the courage to do.”

Compared to the majesty of New York’s Metropolitan Opera House a couple of miles up the road, Thumbprint is a tiny production with a six-person chamber orchestra and cast of just six singers. Shown as part of a small chamber music opera festival in its second year, tickets cost just $25 for the 90-minute production, which organizers hope will eventually tour India and Pakistan.

Unable to find a suitable sarangi player, Sankaram’s score has been written for flute, violin, viola, piano (with harmonium on the side), and a brilliant double bass and percussionist. Most of the singers perform more than one part and the Baruch Performing Arts Center seats just 170 people. The run ends Saturday, but it’s unclear what Mai makes of it all.

Since the attack, she has set up a school for girls and won prominence in the West for her outspoken stance on the oppression of women. Manu Narayan, the Broadway star who has won rave reviews as an all-too-realistic unrepentant rapist, welcomed the opera and the Prototype opera festival as a vital platform for young composers. “I think the music’s spectacular,” Narayan said. “This festival is so wonderful. It really creates a very focused platform for new works and great stories that need to be told, and the story of Mukhtaran Mai is one of the prime examples.”

The Emmy winning documentary on Mukhtaran Mai, “Shame” can be seen here:
https://vimeo.com/23429829

There should be strict control on such Crime.

So many rapes have been committed after mukhtara mai then why only she is being represented as a rape icon? what is about india? where situation of women is very very miserable .This is just a ploy to condemn pakistan as far as we believe.And villages in pakistan are not as much as insecure as this documentary depicts

i don tknow about the show but its a good way of showing rest of india/pakistan what is going on and how it affects the ictim and all around her..it also shows ..women will not remain quiet for ever.
an icon?????? do u want a show on every woman raped?.you will need too many stages

God Bless all the victims and those who are doing something to create awareness and make changes.. its a long road. Help if u can. dont look at negative