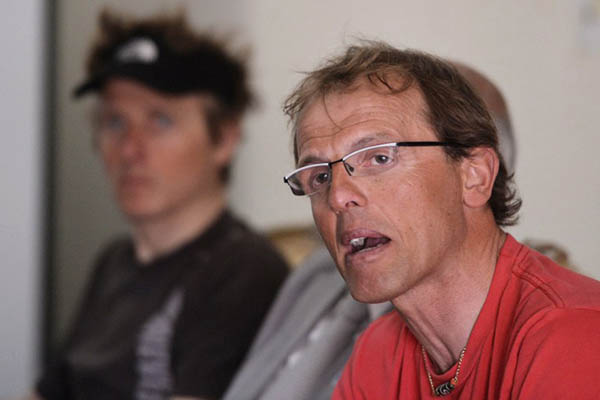 “Alex Txikon [Spain], Ali Sadpara [Pakistan] and Simone Moro [Italy] have reached the top of Nanga Parbat,” Karrar Haidri, spokesman of the Alpine Club of Pakistan told AFP, confirming it was the first time the summit has been reached during winter months.

He said a fourth climber, Tamara Lunger of Spain, had been forced to halt the climb some meters beneath the summit.

Pakistan’s leading climber Nazir Sabir hailed the feat as a remarkable accomplishment in the world of mountaineering. “It is a great achievement from a mountaineering point of view because in Pakistan it is far more difficult than Nepali mountains as we are further north and the climate is more harsher,” said Sabir, who scaled Mount Everest in 2000 and K2 in 1981. “I congratulate the team on this great achievement and also congratulate Ali Sadpara and all Pakistanis,” Sabir added.

At 8,125 meters Nanga Parbat is the world’s ninth highest mountain. It earned its grisly nickname after more than 30 climbers died trying to conquer it before the first successful summit in 1953. Its fearsome Rupal Face, rising more than 4,000 meters from base to top, presents one of the most difficult—and tantalizing—challenges in climbing.

The climbers will spend Friday night at Camp 4 at 7,200 meters, and return to base camp tomorrow, Haidri said, adding that only then will they have completed the ascent.

Social media was abuzz with the feat as fans hailed and congratulated the climbers—including Moro, one of the world’s leading Alpinists, who was among those to return unsuccessful from an attempt to scale Nanga Parbat in 2014.

“We, Simone and Tamara’s team, want to say that we are HAPPY & PROUD of the all 4 athletes!!! And we look for a direct contact to them when they will be at C4,” said a statement on Moro’s Facebook page.

In 2013 gunmen shot dead 10 foreign climbers and their Pakistani guide at the Nanga Parbat base camp—one American with dual Chinese citizenship, two other Chinese, three Ukrainians, two Slovakians, one Lithuanian and one Nepalese.

Nestled between the western end of the Himalayas, the Hindu Kush mountains and the Karakoram range, Gilgit-Baltistan houses 18 of the world’s 50 highest peaks. It is also home to three of the world’s seven longest glaciers outside the polar regions. Hundreds of its mountains have never been climbed.