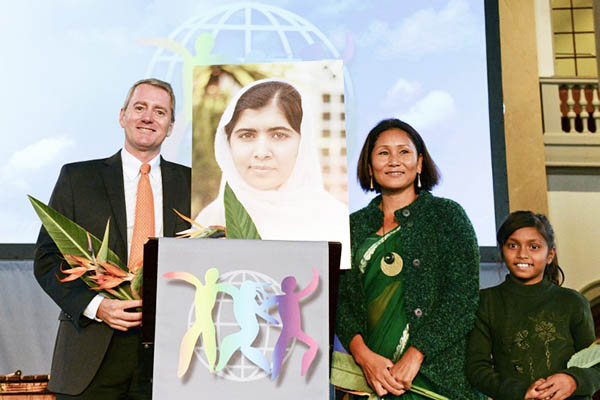 The U.N. Palestinian refugee agency UNRWA, which has launched a massive $1.6 billion appeal for aid for Gaza, said she would be donating all $50,000 of her World’s Children’s Prize. “This money will totally go to the rebuilding of schools for children in Gaza, so I think it will definitely help those children to continue their education, to get quality education,” the 17-year-old Pakistani told a press conference in Sweden at the awards ceremony. “We already know how children have suffered in Gaza from conflicts and war, so those children need our support right now, because they are going through many difficult situations.”

The money will be donated via UNRWA to help rebuild 65 schools in the Gaza Strip. The tiny Palestinian territory was devastated in the July-August conflict this year between Israel and Hamas-led Gaza militants.

Nearly 2,00 Palestinians were killed, most of them civilians, as well as 73 people on the Israeli side, mostly soldiers. The conflict also destroyed tens of thousands of houses in the impoverished strip, as well as key infrastructure, and left some 100,000 Gazans homeless.

Earlier this month UNRWA issued its largest ever appeal for $1.6 billion to help rehabilitate Gaza.

Yousafzai, the youngest ever Nobel Peace Prize winner, is also the first child to win the World’s Children’s Prize—apart from Anne Frank who was honored posthumously.

Organizers of the World’s Children’s Prize said she was honored for her “courageous and dangerous fight for girls’ right to education.”

Honorary awards this year also went to former Microsoft executive John Wood, founder of the Room to Read literacy group, and Indira Ranamagar from Nepal, for her work for the children of prisoners. The award was created in 2000 and is part a worldwide educational program in which children learn about global issues, democracy and their own rights.

This has got to be the stupidest thing. I totally respect Malala and what she has done by getting the spotlight on Pakistani Women’s education & she truly deserves the award & the money. But why not donate the money to your own country. Why are we so obsessed with Gaza??? WTF are the Gazans doing for you? SMH…..Pakis need to wake the F up and stop getting overly obsessed with these Arab countries who do not give a crap about Pakistan but yet we keep kissing their a$$es