Malala Portrait Up for Auction 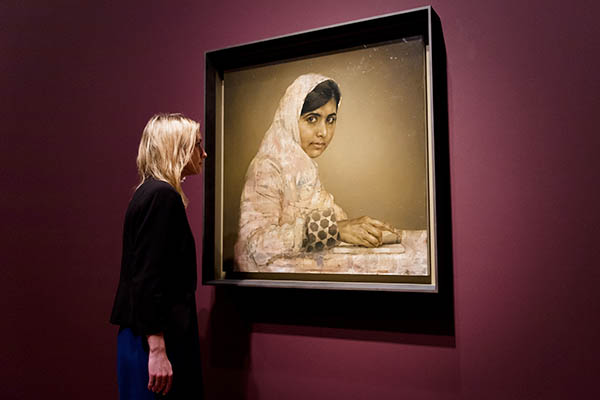 Proceeds from sale of oil on canvas painting by one of Britain’s leading painters will support the Malala Fund.

A portrait of Malala Yousafzai, the Pakistani schoolgirl shot in the head by the Taliban, is expected to fetch up to $80,000 for her charity when it is auctioned in New York next month.

By Jonathan Yeo, one of Britain’s leading portrait painters, the oil on canvas has been on display at the National Portrait Gallery in London since September. The picture, which shows the 16-year-old doing her homework and which measures nearly one meter by one meter, goes under the hammer at Christie’s on May 14. The auction house estimates the value at $60,000 to $80,000.

“The funds raised will support the work of the Malala Fund, including helping young Syrian refugees in Jordan and girls freed from child labor now attending school in Pakistan,” said Malala, who was badly wounded but survived the October 2012 attack. “I hope that whoever buys the painting knows that their generosity will directly help children in some of the most challenging environments in the world.”

Yeo, who donated the painting, met Malala in April 2013 when she was recovering from the severe head injury inflicted by a Taliban gunman as she sat on a school bus in Swat. She was targeted for her outspoken views on education for girls.

Yeo painted Malala in Britain, where she has settled since the attack, and he said it had been a “privilege.”

“I hope the painting reflects the slight paradox of someone with enormous power yet vulnerability and youth at the same time,” he said.

We are giving too much coverage to anything and everything related to Malala. We are suffering from Malala syndrome, a viral disease that has become contagious. The auction of a portrait of her should be a non issue.

We do not need to sell her image to donate for the fund established in her name. Let us not publicize and commercialize her . She is a living person , not a commodity for sale in the market place. Who ever can pay the price , can have her. Some dignity must be kept in these ventures. I do not think the portrait would attract the attention of the rich buyers.