Malala Urges Children to Fight for Their Rights 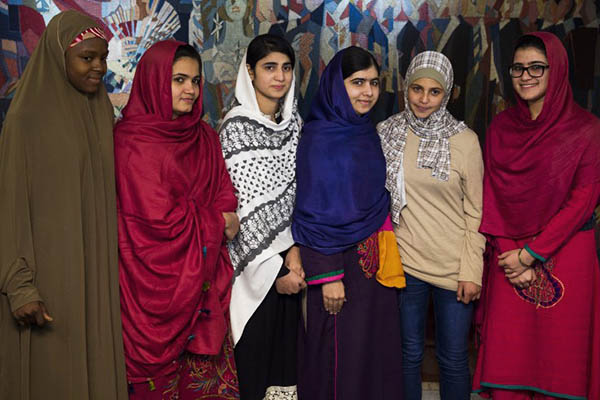 Teen activist tells press conference ahead of Nobel ceremony that people against education are usually ‘uneducated’ or ‘indoctrinated.’

Malala Yousafzai, the global icon of children’s rights who survived a near fatal Taliban gun attack, becomes the youngest Nobel Peace Prize laureate on Wednesday, adding yet another distinction to a long list.

The 17-year-old Pakistani will receive the peace prize in Oslo with Indian campaigner Kailash Satyarthi, 60, who has fought for 35 years to free thousands of children from virtual slave labor.

Malala has already received a host of awards, standing ovations and plaudits from the United Nations to Buckingham Palace. But on the eve of the ceremony she said she was far from ready to rest on her laurels.

“We are not here just to accept our award, get this medal and go back home. We are here to tell children especially that you need to stand up, you need to speak up for your rights … It is you who can change the world,” Malala told a press conference at the Nobel Institute in Oslo. “In this world if we are thinking we are modern and have achieved so much development, then why is it that there are so many countries where children are not asking for any iPad or computer or anything. What they are asking for is just a book, just a pen, so why can’t we do that?”

Malala was 15 when a Taliban gunman shot her in the head as she traveled on a school bus in response to her campaign for girls’ education. Although her injuries almost killed her, she recovered after being flown for extensive surgery in Birmingham, central England. She has been based in England with her family ever since, continuing both her education and activism.

For the first time ever the blood-soaked school uniform she wore when she was shot near her home in the Swat Valley in October 2012 will go on display in an exhibition at the Nobel Peace Center in Oslo this week.

At her invitation, five other teenage activists joined her in Oslo from Pakistan, Syria and Nigeria, including Shazia Ramzan, 16, and Kainat Riaz, 17, who were also shot during the Taliban attack on Malala, and 17-year-old Amina Yusuf, a girls’ education activist from northern Nigeria where the terror group Boko Haram abducted more than 200 schoolgirls during a raid in April 2014.

Asked why she thinks some Islamic extremist groups are opposed to education for girls, Malala, dressed in a multi-colored headscarf, replied: “Unfortunately, those people who stand against education, they sometimes themselves are uneducated or they’ve been indoctrinated.”

The pairing of Malala and Satyarthi had the extra symbolism of linking neighboring countries that have been in conflict for decades. After being named as a laureate, Malala said she wanted both states’ prime ministers to attend the prize-giving ceremony in Oslo. “If the prime ministers had come here I would have been very happy. I would have thought of it as a big opportunity to ask them … to make education their top priority and work on it together because we see the number of children who are out of school and suffering from child labor are mostly in India and Pakistan.”