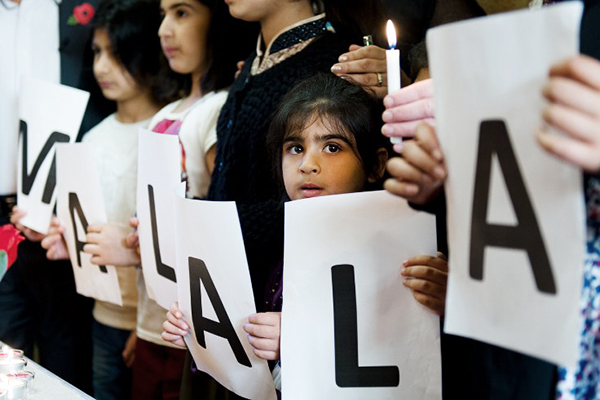 Education campaigner’s friends and family hail her achievements in highlighting injustices in society.

“She is [the] pride of Pakistan. She has made her countrymen proud. Her achievement is unparalleled and unequalled. Girls and boys of the world should take the lead from her struggle and commitment,” he said in a statement.

Yousafzai, who was shot in the head by the Taliban two years ago, has become a global icon for girls’ education and was nominated for the prize last year too.

Sharif was joined in his tribute by residents of her native Swat Valley, the northwestern area that was ruled by Taliban militants from 2007 to 2009. Ahmed Shah, Malala’s schoolteacher and uncle, told AFP: “Malala is a pride for Pakhtunkhwa and Pakistan,” referring to Khyber-Pakhtunkhwa province. “She raised her voice for the injustices in a society where women can’t even speak.”

Ayesha Khalid, who was at school with Malala, added: “It’s not Malala alone winning this award, the girls of Pakistan have won it. Malala is the light of our eyes and the voice of our heart. She has proved that you can’t put a halt to education by blowing up schools.”