Home Latest News May Woos Brexit Voters Ahead of Election

May Woos Brexit Voters Ahead of Election 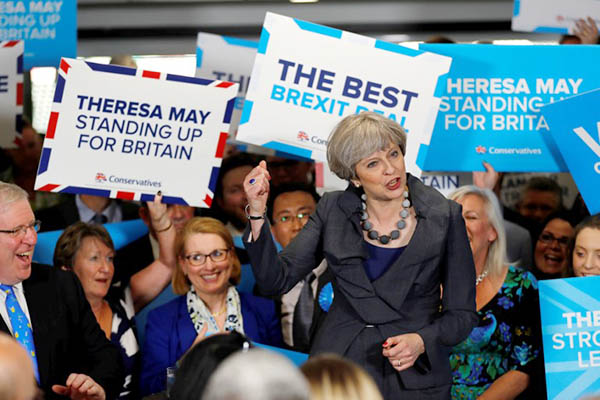 With less than a week to go, British premier’s Conservative party has lost ground to opposition Labour

After a wobble in her campaign, British Prime Minister Theresa May sought to woo voters in a Brexit-backing constituency on Thursday, but activists warned that a policy misstep had lost her support.

With one week to go until the June 8 vote, the Conservative leader headed to northeast England to remind voters of her pitch to be the best person to lead the country out of the European Union.

At a construction equipment firm in Guisborough on the edge of the Yorkshire Moors, where giant diggers lined up in the car park, May vowed that “if we can get Brexit right, I’m convinced the future will be brighter.” Her promise to be tough in the negotiations with the E.U. drew cheers from the audience of mostly local Conservative activists installed on temporary chairs in a warehouse.

“This part of the world voted very strongly for Brexit and I think it’s important that we get it right,” said Paul Howell, who is standing as a Tory candidate in a seat further north. “Theresa May all the way. She reminds a bit of Maggie Thatcher,” added 25-year-old Wayne Layton, referring to Britain’s other female prime minister.

But May is under intense pressure to deliver an increased parliamentary majority from the vote, which she called in April when her party was more than 20 points ahead in opinion polls. Since then, the opposition Labour party has gained ground and May was forced to compromise on a key manifesto pledge on elderly care, which threated many traditional Tories with higher bills.

Jill Coleman, a 70-year-old party activist dressed in her Sunday best, said May was “absolutely fabulous” and posed for a picture in front of the Conservatives’ blue election “battlebus.” But she said the social care policy—dubbed the “dementia tax” in the media—had also caused her alarm, before May confirmed costs would be capped.

“I was very worried because my husband has very bad health,” she told AFP, adding that it may put voters off.

Another Tory activist, Ian Ferguson, said his father-in-law—a lifelong Labour voter—had been ready to switch to May before the social care row. “She was actually getting through to him but that one stumbling block over the dementia tax is [creating] a hesitancy,” he said.

Guisborough is in the parliamentary seat of Middlesbrough South and East Cleveland, a Conservative target. Labour had a majority of 2,268 at the last election, which May is hoping to overturn as she targets working-class voters who backed Brexit.

In the speech at CJ Leonard & Sons, May emphasized her plans to improve skills for young people—although the boss’s daughter was not impressed. “She’s made so many U-turns in the past couple weeks I don’t see how you can believe in her as a leader,” Grace Leonard, a 20-year-old student, told AFP.

A few miles away in south Middlesbrough, Labour’s parliamentary candidate Tracy Harvey said May had little appeal to locals, who were concerned about jobs and public services. “Theresa May is using this election for Brexit, but actually on the doorstep, people aren’t mentioning that,” she said, handing out leaflets outside a shopping arcade, many of the buildings locked up.

As bored children on their half-term break rode their bikes up and down the street, youth worker Ricky Tomlinson made smoothies at a Caribbean-style stall. “I’ve always been Labour, my family’s always been Labour,” the 32-year-old told AFP, adding of May: “Good luck to her, but I don’t think it’s going to happen here.”

The Conservatives have exploited divisions in the Labour party over the left-wing leadership of Jeremy Corbyn, which prompted a failed coup against him after last year’s Brexit vote. But Harvey said support for Corbyn had grown following a number of assured television appearances earlier this week.

“People are saying Jeremy is a strong leader, and he is—he’s got integrity and he’s got principles and that is certainly coming across,” she said.