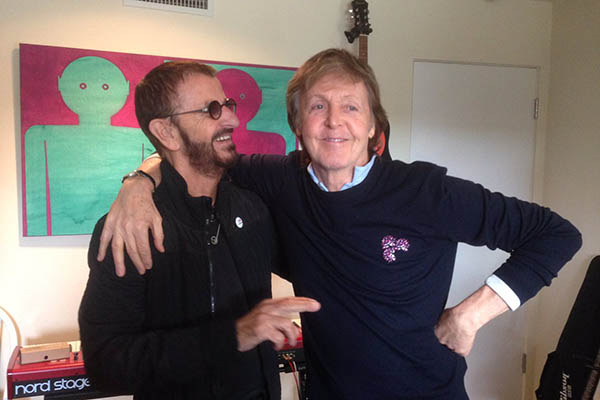 Ringo Starr got a little help from his friend when Paul McCartney dropped by to work on his new album—the first time the two surviving Beatles have come together in the studio in seven years.

Starr posted a picture on Twitter on Monday showing the pair together, McCartney with his arm around The Beatles’ drummer. “Thanks for coming over man and playing great bass. I love you man, peace and love,” Starr wrote.

British media reported they had played together in Starr’s home studio over the weekend. Starr followed up with a second snap of the pair alongside The Eagles guitarist Joe Walsh. “And look out, Joe W. came out to play. What a day I’m having,” Starr said.

Walsh tweeted: “Humbled to play in the studio with these two. What a great time we had!”

The two surviving members of the legendary British band last collaborated in 2010 for Starr’s Y Not album, with McCartney playing bass on “Peace Dream” and singing on “Walk With You.”

Starr is currently working on a follow-up to his 2015 Postcard From Paradise album.

Of the “Fab Four,” singer/songwriter John Lennon was shot dead in 1980, while lead guitarist George Harrison died in 2001 from lung cancer. Bass player McCartney, 74, and drummer Starr, 76, occasionally get together but had not recorded music together in seven years.