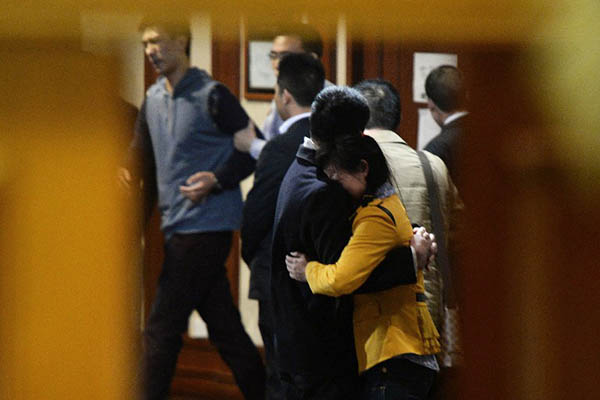 Relatives of passengers onboard MH370 grieve after being informed of the plane crash. Mark Ralston—AFP

Observers question dissemination of information before any wreckage has been discovered.

Malaysia drew criticism at home and abroad on Tuesday for announcing that a missing passenger jet with 239 people aboard had been lost at sea, even before any wreckage was found.

The country’s flag carrier also received ire for informing some relatives of the plane’s loss by text message, although it insisted this had been a “last resort.”

A somber Prime Minister Najib Razak said Monday that Malaysia Airlines Flight MH370, which vanished more than two weeks ago, had “ended in the southern Indian Ocean.” He cited fresh analysis of satellite tracking data and said the information was being shared “out of a commitment to openness and respect for the families.”

Malaysian authorities have come in for repeated criticism for perceived secretiveness and contradictory information since the plane fell off air traffic control screens on March 8 on a flight from Kuala Lumpur to Beijing. Najib’s announcement drew further criticism.

Scores of Chinese relatives marched on Malaysia’s embassy in Beijing on Tuesday, shouting slogans including “The Malaysian government are murderers.” And China’s government demanded authorities in Kuala Lumpur hand over the new satellite data.

Malaysia Airlines insisted that it was doing its best to handle relatives with care and dignity, and had tried to spread Najib’s message with tact before the prime minister spoke. “Wherever humanly possible, we did so in person with the families or by telephone, using SMS only as an additional means of ensuring fully that the nearly 1,000 family members heard the news from us and not from the media,” said airline chief executive officer Ahmad Jauhari Yahya.

The carrier added that it had deployed more than 700 “dedicated caregivers” to support the next-of-kin, who have been given hotel accommodation as well as initial financial assistance of $5,000 per passenger with more on the way. “Our sole motivation last night … was that the families heard the tragic news before the world did,” Ahmad Jauhari said at a news conference, which featured pointed questioning from Chinese journalists. “There are no words which can ease that pain.”

Bridget Welsh, an expert on Malaysian politics at the Singapore Management University, said the authorities’ intentions were good but the means of breaking the news could have been improved. “The use of SMS messages even for additional communication could have been rethought. I imagine every time a person looks at their phone they will be reminded of their loss,” she said. Paul Yap, an aviation lecturer at Temasek Polytechnic in Singapore, said Najib should have delayed his announcement until debris confirmed as coming from the plane had been found.

Online criticism abounded, together with messages of condolences for the victims—two thirds of them from China. “How can Malaysian government declare flight ‘ended’ in Indian Ocean but with no physical evidence?? #MH370 #dontbelieveit,” one user posted. “Malaysian airlines and government concealed and delayed information then tells news of dead relatives by text. #disgusting #MH370,” another said.

The Malaysian government, which has held daily press briefings, has insisted it is passing on information as promptly as it can. “The government has never stopped information from reaching the families,” Najib said in parliament on Tuesday, adding it was his “responsibility” to keep them updated.

Gerry Soejatman, an independent aviation consultant based in Jakarta, said Najib’s announcement marked a “sad day, but at the end of it, we have to be realistic.”

“It was the right thing to do to go ahead and announce, but I understand the frustration of the people. Sadly, the Malaysian government is in a ‘damned if you do, damned if you don’t’ kind of situation,” Soejatman said. “They were criticized for waiting for verification because it meant delays in disseminating information, and now they are being criticized for releasing information as soon as they can.”