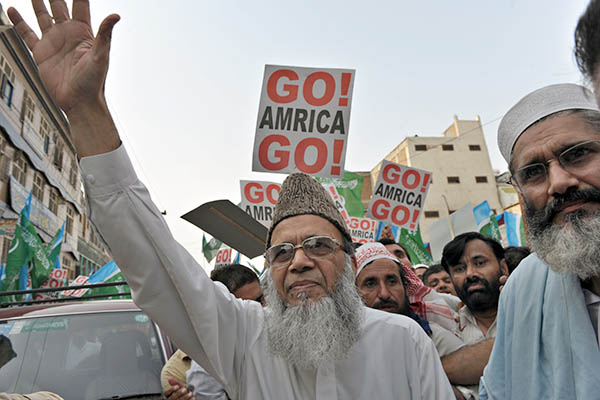 The Pakistani military has issued a brisk statement criticizing Syed Munawar Hasan, chief of the Jamaat-e-Islami party, who has risibly claimed that soldiers killed in battle are merely dead people, not martyrs—a word he reserves for terrorists.

The official reaction from the military’s Inter-Services Public Relations agency—which is demanding an unconditional apology from Hasan—came Sunday night, two days after Hasan issued his widely-panned statement on a cable news channel. Hasan also dubbed Hakimullah Mehsud, the Tehreek-e-Taliban chief killed in a U.S. drone strike on Nov. 1, a martyr.

ISPR “strongly condemn[s] the irresponsible and misleading remarks” and “misguided and self-serving statements” by Hasan, whom it accuses of attempting to “invent a logic based on his political convenience.” The military said that by declaring dead terrorists martyrs, Hasan was “insulting the martyrdom of thousands of innocent Pakistanis and soldiers of Pakistan’s armed forces.” It added that the “sacrifices of our martyrs and their families need no endorsement from Syed Munawar Hasan.”

The military also noted that Hasan’s statement had been universally scorned. The “strong condemnation of his views from an overwhelming majority leaves no doubt in anyone’s mind that all of us are very clear on what the state of Pakistan is and who its enemies [are],” said ISPR. The statement said it was “painful and unfortunate” that the chief of a party founded by Maulana Maududi, “who is respected and revered for his services to Islam,” had made such a statement.

ISPR has demanded an unconditional apology from Hasan: “The people of Pakistan whose loved ones laid down their lives fighting terrorists, and the families of the martyrs of the armed forces demand an unconditional apology from Syed Munawar Hasan for hurting their feelings. It is also expected that Jamaat-e-Islami should clearly state its party position on the subject.”

If anyone murders one person he is called a murderer and deserves only death penalty, how come who killed thousands Muslims, army officers and men, burnt schools and important military and civilian establishments can be a shaheed, he is only the enemy of our beautiful country.

And who started this war, and who okeyed drone attacks? And what about masuds wife killed in drone attack was she a terrorist too?

The TTP started this war by first murdering tribal maliks, then tribal Levies and finally attacking Pakistani army and civilians. Mehsud’s wife suffered the consequences of being married to a murderer.