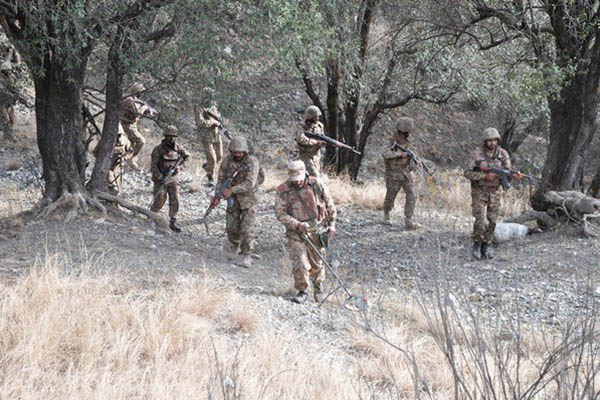 Pakistan said Tuesday it has so far killed 21 militants in airstrikes and ground operations in a northwest border region where it is carrying out an offensive to clear Taliban strongholds.

“Ops continue. Imp heights & passes along Pak-Afgn Bdr secured. Valley’s sanitization in progress,” he said on Twitter. He later posted photographs of armed soldiers in a forested area and a ruined building engulfed in smoke.

It was not possible to confirm how many people were killed in the offensive, as journalists are denied access to the conflict zone.

Pakistan began its operation to clear Taliban and Al Qaeda strongholds in North Waziristan in 2014, and claims to have killed more than 3,750 militants since then with no civilian casualties. But critics and rights activists say there is no transparency around the offensive and no clear end in sight.

In late February the Army said it was entering the final phase of the operation, but offered no further details.

Meanwhile, the toll from a deadly Taliban suicide bombing on a court complex in northwest Pakistan rose Tuesday after a victim died overnight, officials said.

“The death toll from yesterday’s blast has risen to 18 as one civilian succumbed to his injuries while two injured are in critical condition,” said Tariq Hassan, a senior local administration official.

The attack occurred Monday in Shabqadar town and was claimed by the Pakistani Taliban’s Jamaat-ul-Ahrar faction, which said it was to avenge the hanging of Islamist assassin Mumtaz Qadri.