“Notification on Dawn Leak is incomplete and not in line with recommendations by the Inquiry Board. Notification is rejected,” Ghafoor posted on Twitter. He did not offer any details on how the notification differed from the findings of the investigative committee.

Per the original notification, Syed Tariq Fatemi, the Prime Minister’s Special Assistant on Foreign Affairs, was held responsible for the leaks and subsequently removed from his post for not obtaining permission prior to sharing details of a confidential meeting with Dawn. It also held that Rao Tehsin Ali, the principal information officer for the Ministry of Information, would be penalized under the Government Servants (Efficiency and Discipline) Rules, 1973. The notification also slated Dawn editors Zafar Abbas and Cyril Almeida.

“The role of daily Dawn/Mr. Zafar Abbas/Mr. Cyril Almeida in the instant matter shall be referred to All Pakistan Newspapers Society (APNS) for necessary disciplinary action to be taken against them.” It goes on to ask the APNS to formulate a new Code of Conduct for print media to ensure “stories on issues of national importance and security are published by abiding to basic journalistic and editorial norms.”

Leaders of the PTI and PPP both came out in favor of the military, effectively supporting the Army as the most powerful institution in the country, which can question the federal government at will. Leader of the Opposition in the National Assembly and senior PPP leader Khursheed Shah said the military’s rejection of the PMO notification was “100 percent correct.” Similarly, PTI spokesman Naeemul Haq told a private TV channel that the military’s statement proved the government was “hiding” the truth. He said dismissing Fatemi was insufficient and vowed to prevent any conspiracy against the Pakistan Army. 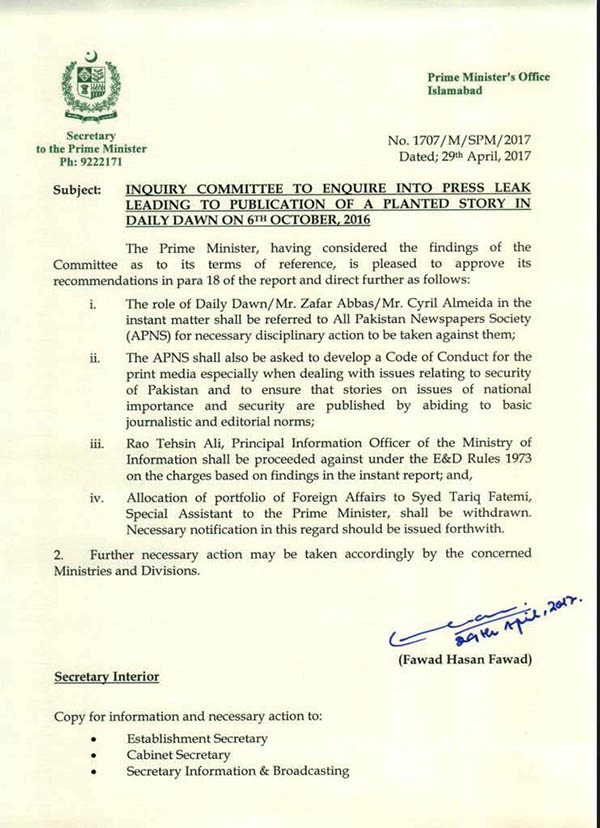 The government had set up an inquiry committee last year to investigate the controversy surrounding a report published by daily Dawn on a meeting between senior government officials and the head of Pakistan’s spy agency, the Inter-Services Intelligence. According to the report, which was attributed to unnamed sources, the civilian leadership had complained to the military that its selective action against militants was isolating Pakistan in the international community.

Notification on Dawn Leak is incomplete and not in line with recommendations by the Inquiry Board. Notification is rejected.

Analysts and observers had declared the original story a sign of the persistent civil-military divide in Pakistan, with many praising the open dialogue between the two institutions as a positive development for the democratic process. Despite this, facing pressure from nationalists, the federal government dismissed the story as “fabricated” shortly after its publication. The controversy also grew after a military spokesman declared it a breach of national security—raising questions over how a “fake” story could be confidential.

Then-information minister Pervaiz Rashid resigned shortly after the story went public, claiming he had not done enough to prevent its publication. Almeida, who authored the report, was barred from leaving Pakistan for several weeks on orders of the Interior Ministry for refusing to identify his source.

In a press conference, Interior Minister Chaudhry Nisar Ali Khan attempted to downplay the military’s tweet by saying that the PMO notification was intended as a memo for the Interior Ministry and not public consumption. “The Interior Ministry will issue the notification on how [the people involved in] the Dawn Leaks issue will be disciplined,” he said, adding that the final notification will incorporate all of the inquiry. Referring to Article 243(1) of the Constitution—“The Federal Government shall have control and command of the Armed Forces”—he said the Army has to abide by the Constitution.

The interior minister also said Twitter was not a suitable medium for state institutions to communicate and dismissed speculation that Islamabad was attempting to “protect” anyone by not implementing the full recommendations of the inquiry into the Dawn Leaks case. “Such tweets are deadly poison for the state and democracy,” he said. “We will soon issue a notification clarifying who will be punished for their role in leaking [the meeting’s minutes] to Dawn.”