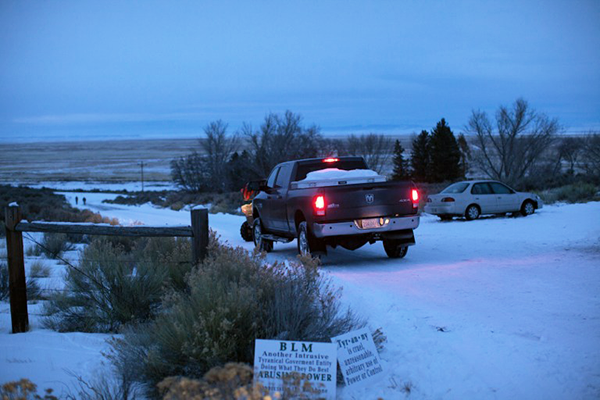 Scores of anti-government militiamen occupied a wildlife reserve in the U.S. state of Oregon for a second night on Sunday, warning that their protest against the jailing of two ranchers, which has divided Americans, could last months.

The group—thought to number about 100—occupied the headquarters of the Malheur National Wildlife Reserve in northeastern Oregon on Saturday after a peaceful rally in support of Dwight Hammond, 73, and his son Steven, 46—ranchers who were jailed over fires on federal land.

The local sheriff’s department said in a statement on Sunday that the building’s seizure was an effort by the group to instigate a confrontation with authorities.

“These men came to Harney County claiming to be part of militia groups supporting local ranchers, when in reality these men had alternative motives to attempt to overthrow the county and federal government in hopes to spark a movement across the United States,” said the statement from David Ward, sheriff of Harney County, where the refuge is located. He added that efforts were under way to resolve the standoff “as quickly and peaceful as possible.”

However, there was no visible police presence Sunday night at the reserve, where several militiamen in vehicles guarded the entrance while others kept watch from a lookout tower. There have also been no reports so far of any confrontation around the facility, which was closed when the militia moved in.

The Oregonian news website reported that the FBI was handling the case.

For their part, the armed militia members—an apparently loose-knit grouping of anti-government farmers, ranchers and survivalists—said they planned no violence but would not rule it out. There have been no reports so far of any confrontation around the federal facility. They announced a press conference for Monday.

School was cancelled in the area for the week and the county courthouse said it would be closed Monday “for security reasons.”

On the Internet, public opinion was divided about the #Oregonstandoff.

“My instinct as conservative is law abiding,” wrote a Twitter user under the handle @steph93065. “But when Fed Govt abuses people using the law, my instinct goes the other way.”

But others branded the takeover an act of domestic terrorism and called on the U.S. government to deal harshly with the armed protesters. “Why aren’t we calling the Oregon militia ‘terrorists?’ – because they are white and Christian. That’s why,” @StephenDybas tweeted.

One of the protesters is Ammon Bundy, the 40-year-old son of Nevada rancher Cliven Bundy, who was at the center of an armed, anti-government standoff with authorities in 2014 over grazing rights on public lands. The younger Bundy, who spoke by phone to CNN on Sunday, called on the government to restore the “people’s constitutional rights.”

His brother Ryan and others in the group have demanded that the Hammonds be released and that the government relinquish control of the wildlife reserve. It was unclear how many of them, if any, might be armed. “We will be here as long as it takes,” Ammon Bundy said. “We have no intentions of using force upon anyone, [but] if force is used against us, we would defend ourselves.”

The Hammonds had been convicted of arson after lighting what they said was a controlled fire on their property that spread to government land. But witnesses at their trial said that Steven Hammond, leading a hunting party, had illegally slaughtered deer on federal property then handed out matches in order to “light up the whole country on fire,” according to a Justice Department statement.

The fire consumed 139 acres of public land and destroyed any evidence of illegal hunting.

The pair had been freed after serving reduced jail time—three months for the father and a year for his son, according to local media. But when a judge, in an appeal, ruled in October that a five-year sentence was justified, the militia groups responded angrily.

Following a rally by around 300 people Saturday in the town of Burns, a group of protesters advanced on the federal reserve 50 miles to the southeast, where wild horses, pronghorns and other creatures roam free.

Ammon Bundy told The Oregonian by phone that the protesters had no intention of leaving anytime soon. “We’re planning on staying here for years, absolutely,” he said. “This is not a decision we’ve made at the last minute.”

The Hammonds are to report Monday to a federal prison in California to serve the balance of their five-year terms, local station KTVZ reported.