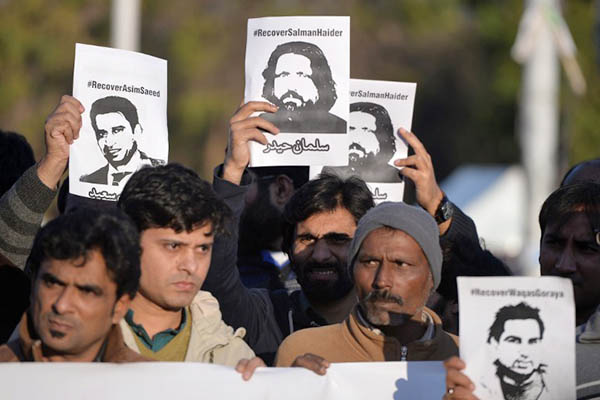 Two Pakistani activists who went missing early this month have been returned and are now safe, their families said on Saturday, more than two weeks after their disappearance along with three others sparked protests and fears of a government crackdown.

Academic Salman Haider is “safe and fine,” a family member told AFP, confirming comments from police. A second activist, also a blogger, was also declared safe by a family member, who asked AFP not to disclose his name.

The days the activist were missing “were the most painful period in my life,” the relative said, adding the returned blogger was now “in [a] safe place for some days.”

The five men—who campaigned for human rights and religious freedom—went missing from various cities between Jan. 4 and 7, triggering nationwide protests. No group has claimed responsibility and the whereabouts of the other three are still unknown.

But Human Rights Watch and other rights groups said their near simultaneous disappearances raised concerns of government involvement, which officials and intelligence sources have denied.

Pakistan has had a history of enforced disappearances over the past decade, but this has mainly been confined to conflict zones near the Afghanistan border or to Balochistan province where separatists are battling for independence. A virulent social media campaign painting the missing as blasphemers triggered a flood of threats despite denials from their worried families, with observers saying the claims could place them in danger.

The charge, which can carry the death penalty, is hugely sensitive in Muslim Pakistan, where even unproven allegations have stirred mob lynchings and murder. Rights groups say Pakistani activists and journalists often find themselves caught between the country’s security establishment and militant groups including the Taliban.

Pakistan is routinely ranked among the world’s most dangerous countries for journalists, and reporting critical of security policies controlled by the military is considered a major red flag, with reporters at times detained, beaten and even killed.