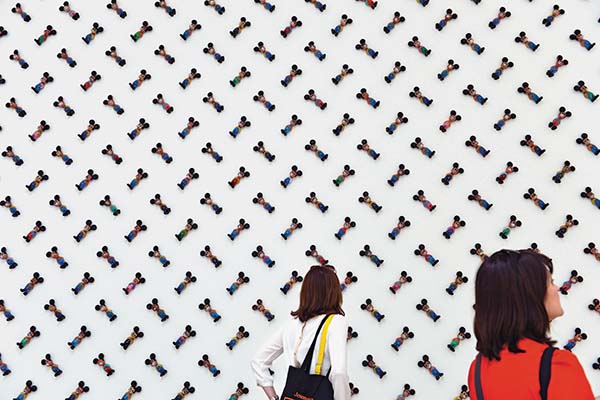 Has all the art in the world been made?

[dropcap]I[/dropcap]magine a single work of art that captured a sense that, after all these decades of trying, modern art hasn’t managed to change the world, or even much affect it. A sense that, for all its variety, modern art—maybe most of Western art for the last 500 years—has been nothing more than a series of moves in a series of games, like clever new plays in clever new versions of football. And imagine that this imaginary artwork managed to condense all the longings of every artist, curator, and critic for an art that was much more than such games, for an art that truly mattered. And then imagine that this work packaged that longing as one giant sigh, from knowing it could never be more than longing.

That artwork is this year’s Venice Biennale, the 55th edition of the world’s most prestigious aesthetic pulse-taking, which opened to the public on June 1. At the heart of this year’s Biennale is a giant group exhibition called The Encyclopedic Palace, put together by Italian curator Massimiliano Gioni, on secondment from his day job at the New Museum in New York. And Gioni’s group show, more focused and polished than any previous year’s, utters the pungent sigh I’ve described.

Rather than offer up a sampling of the best and brightest work being made today, the show digs back into the last 100 years or so of making art, looking for all the times when art has had ambitions beyond merely being good. At the show’s beginning, in the Central Pavilion in the Biennale gardens, there is a room dedicated to Carl Jung’s Red Book, the manuscript in which the famous analyst recorded the images he saw in his dreams and that he thought would grant new access to our hive mind. (The drawings are vaguely medieval and corny, like something out of Game of Thrones: “Bring forth the Red Book of necromancy! We shall conjure the spirits of Targaryens past.”)

Scattered elsewhere throughout the show are works by outsider artists (even more “outside” than the nutty Jung) whose manic objects arose in response to compulsions or madness. There are the lifelike plaster dolls of a Chicago man named Morton Bartlett, made and kept in the privacy of his home; there are private erotic drawings by a repressed Soviet teenager and secret naughty photos of a visionary’s wife; there are arcane images made in the 1920s by Rudolf Steiner and at various times by any number of his colleagues in theosophical and mystic pursuits. These people’s works weren’t meant as clever art-world conceits or witty decoration or fancy goods for sale. However bizarre the look of this outsider art, it almost always has a function that transcends simply looking.

Gioni balances that strangeness with works that take a very different, but equally “functional,” approach to art-making: images that address reality with an almost scientific reverence for what’s in it. They give a sense that the world itself, rather than the artistic act of picturing it, is what’s really at stake. The second half of Gioni’s show, filling the vast warehouses of Venice’s old Arsenale, begins with J. D. ’Okhai Ojeikere’s wonderful photos of elaborate Nigerian hairstyles, but also touches down on the stunning bird photography of Eliot Porter (son of Fairfield, the great realist painter) and on Kan Xuan’s giddy slide show of every surviving imperial burial mound in China. A French artist named Camille Henrot, while on fellowship at the Smithsonian Institution in Washington, D.C., cobbled together a manic video collage of all the different aspects of her host’s famous dedication to the “increase and diffusion of knowledge.” It is exploration on both steroids and speed, as Henrot explores the explorers.

Whatever ambitions a work of art may have, it ends up being just more of the same.

And here’s what happens when all of these different kinds of images, with their very un-arty goals, get included in the Venice Biennale: each and every one becomes art, not so different from a Jeff Koons dog or a Damien Hirst spot.

Ever since Duchamp’s urinal hit the scene in 1917, and possibly for a dozen or more decades before that, what has set artwork off from other things in the world is not what it looks like or what it references or anything it does, but the fact that we’ve been invited to contemplate it as art. And that’s what every visitor was doing with every work on view during the preview days of the Venice Biennale. (Although “contemplate” is a rather grand word for the casual grazing that was going on, with the audience acting more like shoppers at Bloomingdale’s than reflective Kenneth Clarks.) The show’s mystic art wasn’t giving anyone mystic powers; visitors were hardly “using” the erotica the way its makers had. The most informative photos were barely informing; they were being enjoyed as fine art with an informative flair.

Gioni’s show, for all the old ghosts it channels, also seems to insist that looking back to a time when art mattered cannot be the way forward for the art of today. Or maybe it suggests something rather more melancholic than that: that there’s not really a way forward at all, because art’s games, on view in this show in every possible permutation, have simply exhausted themselves. Whatever ambitions a work of art may have, it ends up being just more of the same.

A talisman for this view might be a recent video by the Pole Artur Żmijewski, one of the grimmest and greatest artists working today. In this work, titled Blindly, Żmijewski offers paper and paint to a number of unsighted people, getting them to depict themselves and landscapes and beasts. He documents the eagerness of their attempts as well as their befuddlement when faced with the task, not to mention their moments of evident failure: a brush still being used once it has run dry; a blind artist wanting to add on to his sun but losing track of where he painted it. And, of course, Żmijewski documents the sorry results of their efforts: gloppings and scratchings of color that barely depict what they show. And it’s impossible not to think that Żmijewski feels that their fates as artists are the same as his: condemned to a blind groping for success, without ever sensing where success might lie or knowing if it’s in reach.

But here’s the thing: even for the blind making useless messes, the attempt somehow seems worth the trouble.