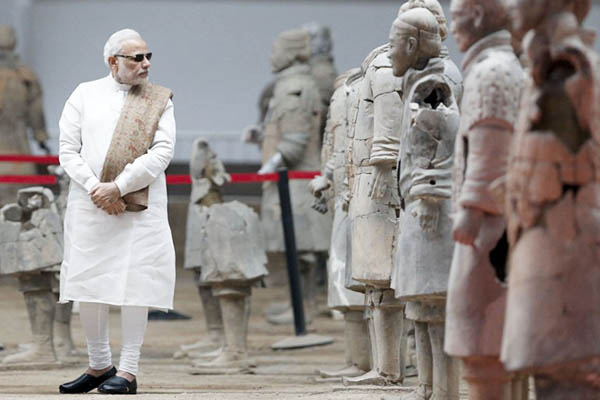 Indian Prime Minister Narendra Modi began a three-day trip to China on Thursday by inspecting the Terracotta Warriors as a festering border dispute colors relations between the Asian giants.

Modi visited the World Heritage Site in the ancient Chinese capital of Xian, pictures posted on his official Twitter account showed, after he was greeted on the airport tarmac by a dancing troupe. Photographs posted on the social media network showed his comments in the visitors’ book read: “The Terracotta Army is a heritage of the world. It is a testimony to China’s civilizational achievements.”

Xian is the capital of Shaanxi, Chinese President Xi Jinping’s ancestral home province. Xi was expected to join Modi in Shaanxi later, reciprocating after Modi hosted Xi in his home state of Gujarat last year. Modi will then head to Beijing and China’s financial hub Shanghai, seeking to deliver on election promises to attract foreign investment for India’s crumbling rail and other infrastructure.

Ahead of his trip, Modi said he firmly believed “this visit to China will strengthen the stability, development and prosperity of Asia.”

“I am confident my visit will lay the foundation for further enhancing economic co-operation with China in a wide range of sectors,” he wrote on Twitter last week.

China is India’s biggest trading partner with two-way commerce totaling $71 billion in 2014. But India’s trade deficit with China has soared from just $1 billion in 2001-02 to more than $38 billion last year, Indian figures show. However, ties between the world’s two most populous countries have long been strained over a Himalayan border dispute that saw the two nations fight a brief, bloody war in 1962. Despite Modi’s overtures, tensions remain.

Earlier this week an op-ed in the Global Times, affiliated with Communist Party mouthpiece the People’s Daily, accused him of “playing little tricks over border disputes and security issues.”

Writer Hu Zhiyong added that few Indians were able to understand Sino-Indian relations, due to “the inferiority of its ordinary people.”

Modi led his Hindu nationalist Bharatiya Janata Party to a crushing electoral victory last May on a promise to revive India’s flagging economic fortunes. After China, he will head to Mongolia and South Korea.