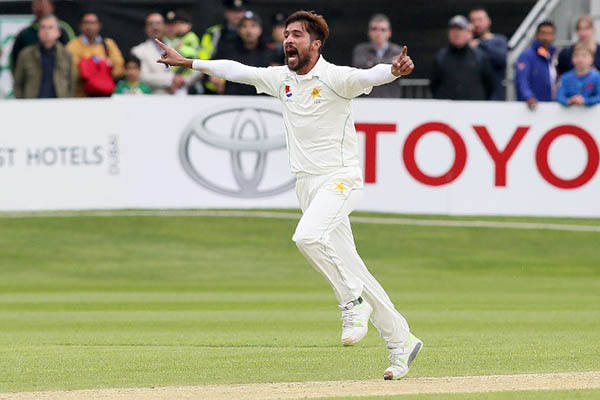 Bowler returns to play after recovering from knee injury

Mohammad Amir took his 100th Test wicket after returning to the fray against Ireland on Monday despite a troublesome knee injury.

The Pakistani spearhead went off just 3.2 overs into his spell on Sunday during the second innings of Ireland’s inaugural Test with a recurrence of a “chronic” left knee problem. It was a worrying sign for Pakistan, who next play a warm-up match against Leicestershire (May 19-20) before facing England in a two-Test series, with back-to-back fixtures at Lord’s (May 24-28) and Headingley (June 1-5). But left-arm quick Amir was back on the field from the start of Monday’s fourth day.

Following-on, Ireland resumed on 64 without loss.

Amir did not come into the attack until Monday’s ninth over, with the hosts 81 for two after Ed Joyce had been run out by Faheem Ashraf and Andrew Balbirnie lbw for his second nought of the match to Mohammad Abbas.

Amir was not operating at top speed to begin with on Monday—often the case with many fully-fit pacemen when they bowl their first over of the day—and flexed his knee while walking gingerly between overs.

However, he struck with his 29th ball on Monday when he demolished the stumps of Niall O’Brien (18) with a full-length delivery—a wicket greeted with Amir’s customary arms-outstretched celebration. And 94 for three became 95 for four when Amir had Ireland captain William Porterfield (32) edging to wicket-keeper Sarfraz Ahmed, the Pakistan skipper.

At that stage, Amir had taken two wickets for no runs in six balls.

After a spell of two wickets for 10 runs in seven overs, including three maidens, Amir left the field some 25 minutes before the scheduled lunch break. He was back on the field before the interval but did not bowl again in Monday’s first session.

But after lunch Amir, in his 31st match at this level, took his 100th Test wicket when Gary Wilson was held in the slips by Haris Sohail to leave Ireland struggling at 157 for six. At that moment, Amir’s overall Test figures stood at 100 wickets in 31 matches at an average of 31.45.

The now 26-year-old Amir’s cricket career almost came to an end following his involvement in a spot-fixing scandal during a 2010 Test against England at Lord’s. Amir was given a jail sentence by an English court and a five-year ban by the International Cricket Council, but made his return to the world stage two years ago.

Pakistan bowling coach Azhar Mahmood suggested after stumps on Sunday that Amir’s lengthy time away from the game allied to the fact he had been involved in all three international formats—Tests, one-dayers and Twenty20s—since coming back had taken a toll on the swing bowler. “He has got a chronic knee problem which has slightly flared up,” said Mahmood. Unfortunately, he came back after five years [out] and since he came back he has played every format for us. We have to manage his workload as well so maybe that’s a sign for us in the future to see where he stands,” the former Pakistan all-rounder added.

“We want him to play Test cricket because he’s our number one bowler,” said Mahmood.

Amir, who helped Essex win English cricket’s first-class County Championship last year, burst onto the world scene as a teenager and at 18 was the youngest bowler to the landmark of 50 Test wickets. His first 14 Tests saw Amir take 51 wickets at just a fraction over 23 runs apiece, but his 16 completed Tests since his comeback yielded 44 wickets at a more expensive average of 37.25.