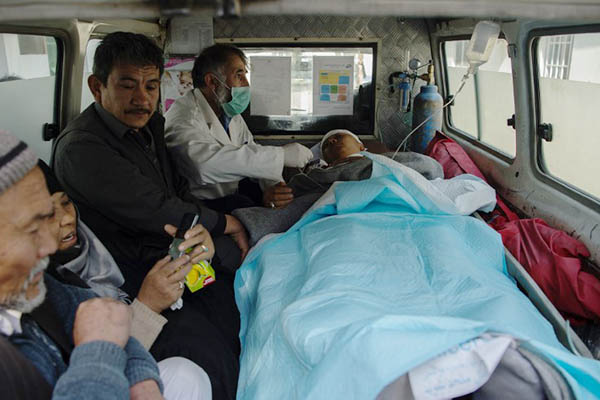 Blast marks resumption of violence in Afghanistan after weeks of calm amid peace talks between the U.S. and Taliban

A mortar attack on a large ceremony attended by Afghanistan’s chief executive and other leading government figures in Kabul on Thursday killed three people and injured 32 others, officials said.

The attack claimed by the Islamic State group represents a major security breach and marks a resumption of violence in the capital after weeks of calm amid ongoing peace talks between the U.S. and Taliban in Doha.

“Stay calm, the area of the blast is far from us,” said former lower house speaker Mohammad Younus Qanooni from the stage during a live broadcast of the outdoor event. But moments after the announcement, another explosion and gunfire could be heard that sent people running in panic.

A second unidentified voice then addressed the screaming crowd, saying: “I request my countrymen to stay calm. The mortar attack is far from the gathering.”

The blasts took place during a ceremony marking the 24th anniversary of the death of Shia Hazara leader Abdul Ali Mazari that was attended by many of the country’s political elite, including Afghanistan chief executive Abdullah Abdullah and former president Hamid Karzai. I.S. later claimed the barrage by saying its fighters targeted the ceremony with mortar fire, according to a statement published by the group’s propaganda agency Amaq.

“Today around 12 noon… mortars were fired on the gathering of Abdul Ali Mazari,” Nasrat Rahimi, interior ministry spokesman, said in a statement sent to journalists, adding that the mortars landed outside the actual event.

The spokesman later confirmed that two assailants behind the incident had been killed and the “main attacker” arrested. “Sadly, three people have been martyred [killed] and 32 more injured in the mortar attacks,” Rahimi told media.

Presidential candidate Abdul Latif Pedram was among the injured, according to his official Facebook page, which said he was in “stable condition.”

Foreign Minister Salahuddin Rabbani—who was also at the scene—later added that “terrorists launched rocket attacks,” and said he had escaped safely.

Mortar fire is commonly referred to as “rockets” by Afghan officials.

I.S. have claimed responsibility for a string of bloody attacks on Shia gatherings and mosques across the country over the years.

The group however has been relatively quiet in recent months as the Taliban, Afghan security forces, and the U.S. all target I.S.’s shrinking stronghold in eastern Afghanistan near the Pakistan border. “This was the most horrid and unforgivable attack on civilians by a merciless enemy,” tweeted presidential candidate and former national security adviser Mohammad Haneef Atmar.

He added that eight of his security guards were injured in the attack.

“How these attackers managed to get into this Shia neighborhood, pass through all the security cordons, and then attack such an important gathering is indicative of a major security and intelligence failure on the part of the Afghan government,” said security analyst Atiqullah Amarkhail.

The incident comes as U.S. and Taliban negotiations hold peace talks in Qatar aimed at ending the nearly 18-year conflict.

The last major attack in Kabul occurred in January when the Taliban claimed responsibility for a car bomb that struck the heavily fortified Green Village foreign compound. Heavy snowfall across large swathes of Afghanistan has led to a reduction in violence this winter, but warmer weather in the country’s south will likely spark an increase in bloodshed with the arrival of the spring fighting season.

Analysts have warned that the Taliban are likely to ramp up attacks in the coming months as they seek to maintain momentum on the battlefield and leverage at the negotiating table.

On Wednesday at least 16 people were killed in a suicide attack on a construction company in eastern Afghanistan’s Jalalabad city. No group has claimed responsibility for the attack, but both the Islamic State group and the Taliban are active near the city, in Nangarhar province.

Afghanistan has been stuck in nearly constant conflict since the Soviet invasion of 1979, which was followed by civil war, the Taliban regime, and the U.S. invasion in late 2001.