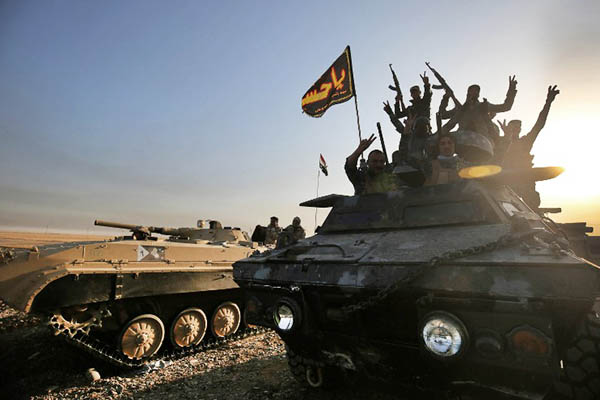 With the battle to retake Mosul kicking off Monday, the Obama administration now really has something to talk about. U.S. efforts to stop the Syrian-Russian bombing of civilians in Aleppo have come to nothing, another black mark against Obama’s vexed policies in the Middle East.

Libya is in chaos, Egypt is run by the military, while Yemen offers ever-more bloodshed and embarrassment. And Obama’s refusal to intervene in Syria’s war, which has already killed 300,000 people, will likely have repercussions for generations to come. But from Aleppo, head 600 kilometers east across the Syrian-Iraqi border, and there is better news.

After two years and some 5,634 strikes against the Islamic State group, Mosul, the jihadists’ last major redoubt in Iraq is in the crosshairs of a ground campaign. Retaking Iraq’s second largest city is unlikely to be quick. But it would be a major victory over the Islamic State group in its own right, and would help Obama greatly.

The bitter 2016 U.S. presidential election campaign has taken place against a backdrop of jihadist-inspired attacks from Paris to San Bernardino, California. Polls show Americans are more concerned about terrorism today than at any time since the aftermath of 9/11.

In a Time/SurveyMonkey poll of 5,478 voters released this month, 58 percent said terrorism and national security should be among the top three priorities for the next president. Donald Trump, the Republican who wants the job, has gained electoral traction with a simple—if functionally questionable—pledge to “bomb the shit out of ISIS.” He has repeatedly accused Obama and his Democratic opponent Hillary Clinton of “founding” the I.S. group—of withdrawing U.S. troops from Iraq too quickly and creating a vacuum that allowed the extremists to thrive.

The Islamic State group’s rapid retreat from towns like Jarabulus and Raqa is likely to fuel questions about why the jihadists were not confronted with more military strength on the ground sooner. Meanwhile, Obama has at times struggled to find Trump’s levels of clarity.

He has tried to show the myriad of actions his administration has taken to counter I.S.—from diplomacy to special ops—while at the same time trying not to overstate their strength and importance.

Privately, aides argue the group is far from an existential threat to the United States, and can only be successful if Americans respond by weakening their own values and institutions.

For much of his eight years in office, the 44th president has also tried and failed to fulfill a campaign promise to draw U.S. troops out of Iraq. The main obstacle has been the inability of leaders in Baghdad to extend their writ to the whole country—by force or by politics deft enough to bring together rival sectarian and tribal groups.

The White House will be hoping the Mosul offensive can shore up Prime Minister Haider al-Abadi, even as opponents oust key ministerial allies from his cabinet. In the run-up to the long-anticipated Mosul operation, the White House has put the onus firmly on Abadi, refusing to even confirm the offensive until the Iraqi prime minister had done so.

The clear message from Washington has been that—despite the pivotal role of U.S. intelligence, air support and strategic guidance—Abadi is in charge. “The Iraqi central government is the one that’s calling the shots. And they should, it’s their country. They’re a sovereign nation,” said White House spokesman Josh Earnest. He also rejected accusations that the timing of the offensive was not motivated by the U.S. election: “He’s not gonna be distracted by the American political calendar.”

Political or not, the White House hopes a victory will give a boost to the Iraqi army after the humiliation of losing Mosul two years ago. Managing competing interests of Kurds, Turks and Arabs, Sunni and Shia will be a proving ground for the much harder task of taking the Islamic State “capital” at Raqa.

Ultimately, strengthening the Iraqi state could be the key to Obama belatedly keeping his promise to withdraw from Iraq and degrade and destroy groups like the Islamic State.