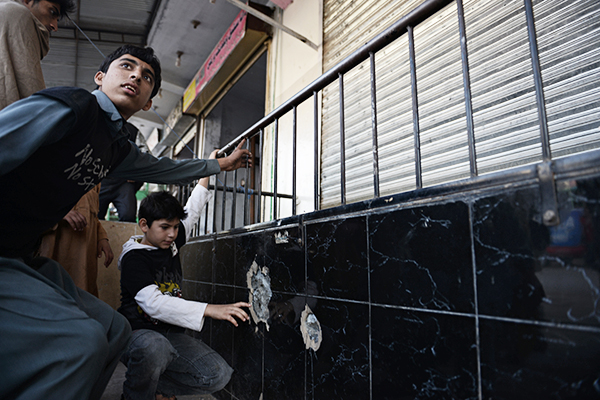 The spot where Nasiruddin Haqqani was killed. Farooq Naeem—AFP

A phantom body, clueless cops, and busy spies: the fallout from the shooting of a senior Haqqani network leader will do little to dampen suspicions of Pakistani complicity with Islamist militants.

Nasiruddin Haqqani, the chief moneyman for one of the most feared factions fighting U.S.-led forces in Afghanistan, died in a hail of bullets outside a bakery on the edge of Islamabad on Nov. 10. After his death it has emerged that he had been living since 2010 in the suburb, Bhara Kahu, as a respected local figure known as “Doctor sahib.”

But at Bhara Kahu police station, just 100 meters from the scene of the shooting, duty officer Khalid was adamant: “Murder, what murder? We have no information about a murder.”

Like with the discovery and killing of Osama bin Laden in Abbottabad in 2011, there has been no plausible explanation from Islamabad as to how a man so wanted by the U.S. could live easily for years on the edge of the capital.

What happened in the immediate wake of the shooting will do nothing to stem the accusation that Pakistan may be playing a “double game” by secretly helping militant groups it deems as favorable to its interests. According to witnesses, after the shooting at around 8:30 p.m. that Sunday, Pakistani agents came, collected all the bullet casings from the scene, and washed away the blood from the pavement outside the bakery.

By then Haqqani’s body was already gone, taken away immediately by his driver to the nearby house where Haqqani had lived since 2010, a discreet one-story brick building. News of the death of “Doctor sahib” spread quickly through the area, but police seemed curiously unhurried, only arriving at the house at 11 p.m., according to neighbors. They found nothing, and it was hardly surprising.

At least two hours earlier, Haqqani’s body had been taken for burial in North Waziristan. The journey of nearly 400 kilometers was hardly done discreetly—a source close to the Haqqani family said the body was carried in a convoy of seven vehicles, including four 4x4s. It was a substantial caravan to pass unchallenged through the countless police and military checkpoints that lie between Islamabad and North Waziristan.

Haqqani was buried the next day in Dandey Darpakhel, the North Waziristan village where Tehreek-e-Taliban Pakistan leader Hakimullah Mehsud was killed by a U.S. drone strike on Nov. 1. The Pakistani Taliban blamed the spy agency ISI for Haqqani’s death, but others, including Afghan intelligence, have pointed to a potential rift in the jihadist movement. As the head of financial operations for the Haqqani network, it is also possible Nasiruddin Haqqani fell out with ruthless business contacts.

For the Bhara Kahu police, the case is closed.

“Officially only one person was wounded in the attack—the baker. We never saw a dead body and no one has reported one, so technically speaking, this ‘doctor sahib’ doesn’t exist for us,” duty officer Khalid said on Wednesday. He was quickly drawn away by intelligence agents who happened to be visiting the police station that day.

The once-peaceful suburb has seen some worrying incidents in recent months, including an attempted suicide attack on a Shia mosque. Some residents complain of a “Talibanization” fed by an influx of Pakhtuns. “Two minutes from here, there are places where you don’t go out at night, where convoys of cars with blacked-out windows pass by regularly,” a shopkeeper said.

After Haqqani’s killing, locals were astonished to learn who their neighbor had been. “Doctor sahib had an excellent reputation, he prayed five times a day, said hello to people,” said Nasir Abbasi, an estate agent living on the same street. Only once in recent years did the area mobilize to kick out an undesirable—a bachelor who dared to entertain female guests. “People thought, ‘this does not conform to Islam,’ and called the police and he had to move,” said Abbasi, who was still shocked by such behavior—far indeed from the spotless reputation of the peaceful and popular “doctor sahib.”