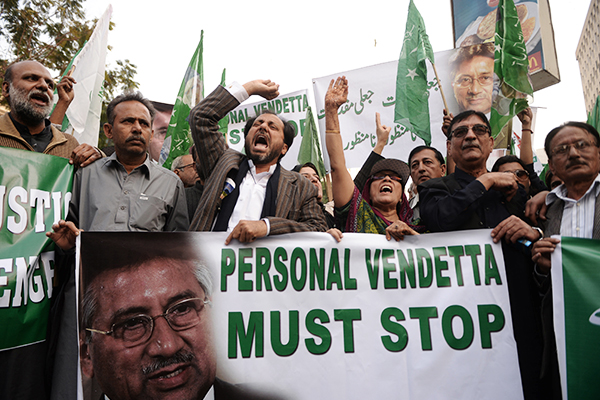 Musharraf returned to Pakistan from self-exile ahead of last year’s general elections. Since then he has been embroiled in legal battles. The government of Prime Minister Nawaz Sharif, the man Musharraf ousted from office in October 1999 and had convicted for treason before pardoning him, has instituted a treason case against the former general for the sacking of some 60 judges, including then-chief justice Iftikhar Chaudhry, on Nov. 3, 2007. If convicted, Musharraf faces the death penalty.

While Musharraf appeared last year in various courts for other cases brought against him, security fears and health complaints have kept him from the treason trial being undertaken by a special tribunal in Islamabad. Since Jan. 2, the 70-year-old has been hospitalized at the Armed Forces Institute of Cardiology in Rawalpindi.

An earlier unreleased diagnosis from the AFIC said Musharraf was suffering from coronary artery disease and recommended angiography to fully establish the severity of his condition and to see whether bypass surgery was needed.

“Angiography is a diagnostic process but it may result in coronary surgery,” said legal sources. “General Musharraf wants that the surgery should be done by a hospital which has all the equipment.” Both Sharif and former president Asif Ali Zardari have in the past traveled abroad for their heart troubles. “The report says that General Musharraf cannot appear … where stress is involved because the disease is unpredictable,” said the sources.

Prosecutor Akram Sheikh has challenged the new medical report and said that the court must have it verified by an independent panel of surgeons at leading civil hospitals of Pakistan. “According to us he is hale and hearty,” said Sheikh.

There have been rumors Musharraf’s ill-health would be used as a face-saving way to get him out of the country before the trial gets fully under way. This would avoid a potentially destabilizing clash between the government and the military. But the former general remains under a travel ban, which the government has repeatedly said it will not lift.

Musharraf himself has previously said he wants to fight and clear his name.