Home Latest News Musharraf to be Charged Over Bhutto Assassination

Musharraf to be Charged Over Bhutto Assassination 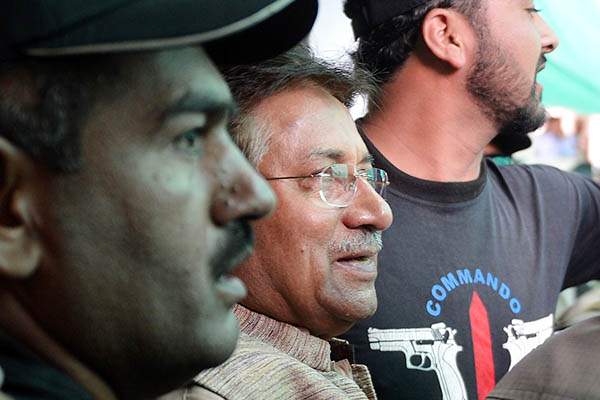 Former president of Pakistan will be charged in anti-terrorism court on Aug. 6.

Musharraf, once the most powerful man in the nuclear-armed country, has been under house arrest since April. He appeared before an anti-terrorism court in person on Tuesday.

Indicting a former Army chief would be an unprecedented move in a country ruled for more than half of its life by the military. It would be seen by many as a challenge to the armed forces’ power.

Bhutto, twice elected prime minister of Pakistan, was assassinated in a gun and bomb attack in December 2007 after campaigning for election in the garrison city of Rawalpindi.

He said Musharraf would have to appear in person.

“The charges relating to criminal conspiracy and murder will be read out before him and he will have to sign the charge sheet, after which further trial will proceed,” he said.

Musharraf’s lawyer Ahmed Raza Kasuri said the retired general would plead not guilty and the court had on Tuesday ordered that his bank accounts and assets be unfrozen. “Gen. Musharraf is appearing in all cases against him,” Kasuri said.

The main prosecutor in the case, Chaudhry Zulfiqar, was shot dead in Islamabad on May 3.

Musharraf’s government blamed Bhutto’s killing on Pakistani Taliban chief Baitullah Mehsud, who denied any involvement and was killed in a U.S. drone attack in 2009.

Musharraf is also wanted for treason by imposing emergency rule in 2007, and over the death of Baloch rebel leader Nawab Akbar Bugti during a military operation in 2006.