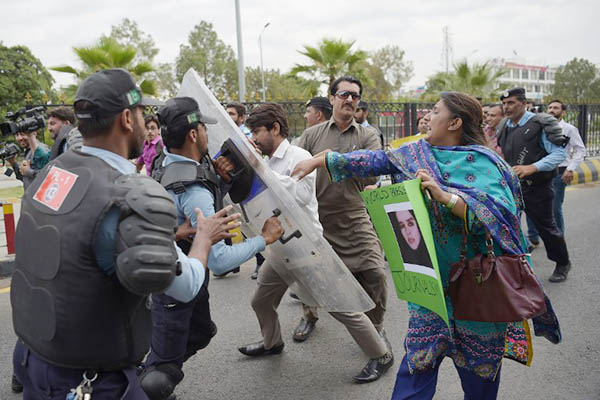 Police clash with journalists during a rally to mark World Press Freedom Day in Islamabad on May 3, 2018. Aamir Qureshi—AFP

As deposed prime minister Nawaz Sharif keeping referring to the “Martians” who planned and executed his ouster, reports are surfacing about a covert censoring of the media ahead of this year’s general elections.

Sharif’s “Martians” are clearly the Army establishment, plotting the defeat of his Pakistan Muslim League (Nawaz) and the enthronement of Pakistan Tehreek-e-Insaf (PTI) with the help of the Pakistan Peoples Party (PPP). The judicial aggression of Supreme Court Chief Justice Mian Saqib Nisar offers a legal underpinning to this exercise.

Last month, over 50 Pakistani journalists, including editors, columnists and affiliated personnel signed a petition against what they thought were curbs on media. On May 3, popular broadcast anchor Kamran Khan “revealed” in his program that the National Accountability Bureau (NAB) was harassing the PMLN in Punjab while quietly quashing scores of inquiries initiated against the PPP to pressure them in Sindh. Dozens of ministers accused of corruption have been let off the hook to “reward” the PPP’s assistance in toppling the PMLN government in Balochistan and “fixing” the Senate elections against the PMLN for the next six years.

The judicial siege of the PMLN is ongoing. Any objective analysis of it is deterred through the device of suo motu and contempt-of-court proceedings. Someone has been seemingly instructing newspapers against printing columns carrying honest analyses of what is going on. “Rebellious” TV channels are also coming to heel, as in the case of Geo TV, which was until recently boycotted by the PTI for being “pro-Nawaz.”

Through a wheedling interview with PTI chief Imran Khan on May 3, the channel sought to end a ban on its broadcast—and the distribution of its parent Jang Group’s newspapers—from military-controlled Cantonments and Defense Housing Authorities. The channel, per reports, was forced to adopt a “pro-PTI” stance as the closures were resulting in a loss of revenue that was being taken out on its employees through defaulting of salaries.

The stage is set: Nawaz Sharif and his party must be expunged from politics. Pressuring the media to remove all support from the airwaves and newspapers is merely the first step.