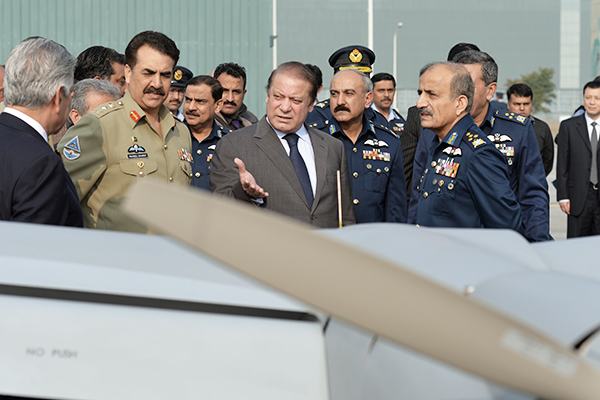 The National Security Committee’s meeting in Islamabad today appeared to send out an all-well signal following recent reports of growing tensions between the federal government and the Army over the trial of former president and Army chief Pervez Musharraf and the stalled peace process with the Pakistani Taliban.

Prime Minister Nawaz Sharif chaired the meeting, which included federal ministers and the military brass, to discuss security and economic issues. Sharif emphasized that the Committee should be utilized by “every state institution” to “provide inputs so that all national-security-related decisions are taken through collective thinking,” according to the official release from Prime Minister’s House, where the meeting took place. Securing Pakistan, it adds, is essential “for consolidating the economic gains that the government [has] achieved.”

According to the state-run Associated Press of Pakistan, the Committee “resolved to utilize all available resources to ensure peace and security in the country” and “endorsed the vision to put Pakistan on the crossroads of opportunity rather than conflict to spur growth for the prosperity of the people.” The Army was widely reported to have been “concerned” about the country’s economic direction during the previous government’s tenure. In today’s meeting, Finance Minister Sen. Ishaq Dar updated military officials about the government’s work on this front: Pakistan’s reentry into the international bond market, the appreciation of the rupee, improving macroeconomic indicators, and the government’s new infrastructure projects worth $35 billion being developed with Chinese assistance.

Interior Minister Chaudhry Nisar Ali Khan also briefed the meeting about the truce talks with the Pakistani Taliban—another reported point of friction between the government and Army.

Yesterday, former president Asif Ali Zardari met with Sharif in Islamabad to reaffirm his party’s support for the federal government in case of any democracy-derailing “intervention” from the Army. Sharif and the Army chief, Gen. Raheel Sharif, are scheduled to next meet on April 19 at the passing-out parade at the Pakistan Military Academy, Kakul.

Meanwhile, the military’s Inter-Services Press Relations agency said today that the Army would assist in the polio-vaccination campaign to prevent Pakistanis from facing international-travel restrictions on this count. Representatives from the World Health Organization, the federal and Khyber-Pakhtunkhwa governments, and the secretariat of the federally-administered tribal areas met at GHQ, Rawalpindi, to chalk out a “whole-nation approach” and to “take all necessary measures” to eradicate polio.