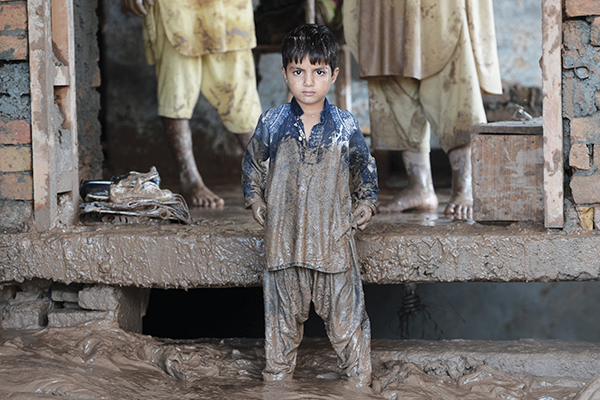 Did India cause the floods and other disasters?

As Pakistan grapples with the destruction, and political fallout, from this year’s floods in Pakistan-administered Kashmir and in Punjab province, all eyes, red with rage, are once again on India. At the same time, the twin antigovernment protests in Islamabad by Imran Khan and Dr. Tahir-ul-Qadri are continuing, painting a miserable picture of a country run by, the protesters say, an incompetent and corrupt government.

In the middle of this natural and political apocalypse came news that Saeed Ajmal, Pakistan’s ace spin bowler topping the international list of wicket-takers with his doosra ball, had been banned by the International Cricket Council because of his crooked-arm delivery. And Sushma Swaraj, India’s foreign minister, decided in the same fateful week to visit Kabul where garlands hid requests for military hardware, which Pakistan thinks will be used against it.

These were all cues for Pakistan’s rageaholic talking heads to open their own floodgates of hate speech against India. They said the floods represented another bout of “water aggression” from India, that Khan and Qadri’s ugly scenes had forced China’s president to postpone his state visit to Islamabad thus forcing him into Prime Minister Narendra Modi’s arms, that the Ajmal episode was the outcome of an India that dominates the ICC and is bent on destroying Pakistani cricket, and that they were always rightly suspicious of India’s Afghanistan policy.

The imagined scenario was that as rainwater mounted, India wickedly opened the sluices of its “illegal” dams and sent it gushing to Pakistan to ruin its farmland and render its farmers homeless. No one thought of confirming whether India had indeed done the deed. The fear and loathing thus aroused didn’t subside even after the water and power minister stood up in the National Assembly to say India hadn’t done it.

Ajmal’s ban was imposed by the ICC after his gradually deteriorating bowling action was scrutinized in Australia and he was given a fortnight to appeal. Our TV anchors immediately zeroed in on India, part of cricket’s Big Three. Former fast bowler Shoaib Akhtar reminded the anchors that India, in fact, helped him when he was slapped with a similar ban. Akhtar even recommended that Pakistan approach the Indian cricket board for help with Ajmal. Of course, no one paid heed to his jarring note.

Our nationalism doesn’t brook reality which has a way of intruding on our imagined wars. The floods came last year, too, and India was routinely blamed.

In August 2013, Pakistan’s Indus Waters commissioner, Mirza Asif Ali Baig, tried to clear the matter by saying that, “The news of India releasing water without warning is baseless.” According to sections 6 and 7 of the Indus Waters Treaty of 1960, India is bound to inform Pakistan before unloading excessive water in its rivers. Baig said that, acting in line with the treaty, India has been informing Pakistan about the release of unwanted water well in time.

Baig also explained that during the monsoons, the six-hourly check-in with India over water levels had been improved to three-hourly coordination. The flood monitoring cell was in contact with the Indian side 24/7, he said, adding that India could do nothing when there was flooding and its dams could not hold more water. If India didn’t release the excess water, it would risk damaging its dams.

Nationalism is a most unworthy way of achieving unity when the country is beleaguered with conflict.

No one bothered to note that Pakistan itself had released floodwater brimming in its Mangla Dam and was in the process of blowing its dikes to save the cities while destroying some downriver farmland.

The anti-India effort made by TV anchors looked tawdry framed against the diatribe flying around in the capital of Pakistan challenging the writ of an already wobbly state. Nationalism is a most unworthy way of achieving unity when the country is beleaguered with conflict. Yet, it is dangerous to go against it in your keenness to serve the truth.

Setting the record straight is perilous business. Take the case of Jamaat Ali Shah, former supremo of the Pakistan Commission on Indus Waters, which is meant to look out for Pakistan’s interests under the Indus Waters Treaty with India.

Four years ago, Shah made the mistake of challenging the hypernationalist narrative that holds India responsible for unleashing a “water war” on Pakistan by “usurping,” through the construction of dams, river waters due to it. Shah said Pakistan was getting its share of waters under the treaty, that India was well within its rights to build dams, and that the country’s water shortage was due to lack of rain and not India. This India-exonerating heresy upset everyone, including the prime minister and the Army chief at the time.

In March 2010, Islamist organization Jamat-ud-Dawah’s newspaper, Jarrar, upset that Shah had not stopped making the strange statement that India had not stolen Pakistan’s waters, said Shah was getting his salary from Pakistan but working for India; and that Shah was bodily a Pakistani but his tongue spoke the language of “Hindus.” Three months later, speakers at a seminar organized by the Urdu newspaper Nawa-i-Waqt agreed that Shah was “defending” India’s “theft”—through its “62 dams”—of waters due to Pakistan. The speakers, including retired ambassadors and Army officers, assessed the “stolen” water volume at 14 million-acre-feet and said such aggression could lead to Armageddon.

By December, the prime minister had suspended Shah, who had held his job since 1993. Intelligence agencies were tasked with investigating the commissioner. Their preliminary findings maintained that Shah had remained suspiciously silent over India’s dam-making, particularly over its Nimoo Bazgo hydroelectricity project on the River Indus. (This project was conceived in 2001 and inaugurated by Modi on Aug. 12 this year.)

In 2012, Jang newspaper said power from Nimoo Bazgo would make Indian soldiers arrayed against Pakistani forces at Siachen “more comfortable.” Around the same time, the Pakistani government said it would challenge the Indian project through international arbitration. Some seven months later, in July 2012, fearing it might lose yet another case to India, the government dropped the idea. But Shah was placed on the exit-control list as news emerged that he had already “escaped” to Canada. All this hysteria happened despite the 1960 treaty allowing India to both take some waters from the western rivers given to Pakistan and building dams for power generation on these rivers.

As far as Pakistani alarmism goes, there is some good news. The Sept. 6 attack on PNS Zulfiqar in Karachi did not elicit the India-did-it response from officialdom. Neither did the tit-for-tat sectarian murders of two big-time clerics in Karachi. The botched hijacking of the frigate was owned by the Al Qaeda-Taliban combine and facilitated by serving and retired members of the Navy. Al Qaeda, which has announced jihad on India, had intended to use the frigate to launch attacks on Indian coastal cities. As Pakistan continues its familiar lurch from crisis to crisis, let’s hope it can acknowledge the real enemy.

Some people in India have said that Pakistan separated for economic reasons, not religious ones. However, over time it has morphed into a religious entity with collateral hatred towards it’s roots.

Pakistani TV anchors are trying to spread the poison of false nationalism and hatred towards India. They are supported by their government and army.India always tried to maintain cordial relations with Pakistan but the politicians and army of Pakistan is against it.