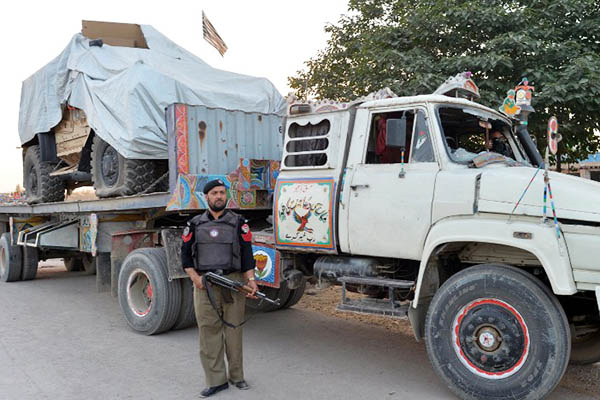 A policeman stands guard next to a truck transporting goods for NATO, May 2013. A. Majeed—AFP

The vehicles came under fire in the Jamrud area of Khyber Agency, one of seven districts that make up Pakistan’s semi-autonomous tribal belt, as they were on their way to Afghanistan. Pakistan is a major transit supply route for the NATO mission in landlocked Afghanistan.

“The four containers were on their way to Afghanistan when four gunmen riding two motorbikes opened fire at them in Jamrud, killing two helpers and wounding one driver and one helper,” said senior local administration official Jehangir Azam Wazir. He said one of the helpers died on the spot while the second one succumbed to his injuries in hospital.

Another local administration official confirmed the incident and said the attackers had fled. No group has admitted responsibility but the Taliban have in the past claimed such attacks to disrupt supplies for the U.S.-led international troops fighting in Afghanistan.

The Pakistani Taliban on Saturday declared a month-long ceasefire to encourage the resumption of peace talks with the government in Islamabad.