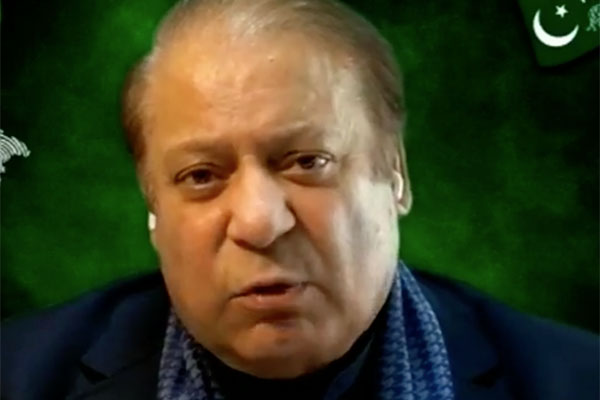 In an address to the Pakistan Muslim League (Nawaz)’s Central Executive Committee (CEC) on Wednesday, former prime minister Nawaz Sharif reiterated his demands for civilian supremacy and slammed his “unfair” ouster from power.

“People tell me that someone else is running Parliament,” he said. “Other people come and give directions about the day’s agenda and the voting on different bills,” he added. “If the people rise up now, then believe me, change won’t come in years, but rather in months or weeks,” he said.

Taking aim at Prime Minister Imran Khan, Sharif told the security establishment that they had erred in bringing a “mad person” to power. “He [Khan] doesn’t know anything about governance … he’s empty-headed. [You] must be regretting your choice but you still brought him in so his issues are your fault,” he said, adding “we will take answers from you.”

Vowing that the Pakistan Democratic Movement would achieve its goals for accountability and civilian supremacy, he lamented that the government had proceeded to arrest his brother, former Punjab chief minister Shahbaz Sharif, within days of an all-parties conference.

“Shahbaz has played a role in strengthening the PMLN’s narrative. I am proud of my brother, who is an example of being loyal and committed to our ideology,” he said, stressing that his family had a business background and the assets beyond means case didn’t have much merit. “You haven’t tried to arrest [Special Assistant to the P.M. on Information] Asim Saleem Bajwa … who has secured assets worth millions in the past 15-20 years,” he claimed. “The P.M. isn’t even willing to accept his [Bajwa] resignation. He’s been given a honesty certificate by P.M. Khan in the same way former Chief Justice of Pakistan Saqib Nisar gave a clean chit to Imran Khan in the Banigala case,” he said.

In a startling revelation, the former prime minister alleged that Gen. Zaheerul Islam, former head of Pakistan’s Inter-Services Intelligence spy agency, had sent him a message to “resign” during the 2014 PTI dharna against the PMLN government. “Is this right?” he questioned, adding that this message was sent in the “middle of the night” and came with a warning that staying in power could leads to “consequences and even martial law.” Sharif claimed he had said he would not step down and had told the spymaster to take whatever moves he felt appropriate.

Sharif also questioned the military leadership’s claims that it wanted no role in politics, pointing to a statement by Jamiat Ulema-e-Islam (Fazl)’s Abdul Ghafoor Haideri. “He said that Gen. Bajwa had called him and told him to halt their dharna. [The Army chief] told him not to interfere in what the military was doing to Nawaz Sharif,” he said. The statement in question was alleged by Haideri last week and has yet to be denied by the military.

“My conscience cannot accept the rigging in the 2018 elections,” he said, adding that we had escaped the white man’s colonization only to be colonized by our own. “Even our assembly is compromised now,” he claimed.

The former prime minister also mentioned a speech by former Islamabad High Court judge Shaukat Aziz Siddiqui, saying he had claimed the head of the ISI had come to him and told him to not release Nawaz Sharif and his daughter because “that would ruin 2 years’ of our effort.”

Later, in an interaction with media outside his son’s office, Sharif stressed that he had deep admiration for soldiers who defended the country and those who had lost their lives in defense of Pakistan.

Earlier, the PMLN leader asserted that he had a “lot of respect” for former president Asif Ali Zardari after his party stalwart Khawaja Asif told a private TV channel that he did not trust the PPP leader. He said that Asif’s statement was not party policy and the PMLN and PPP were united in the PDM.