Home Latest News ‘Nawaz Sharif Will be Brought Back to Pakistan’ 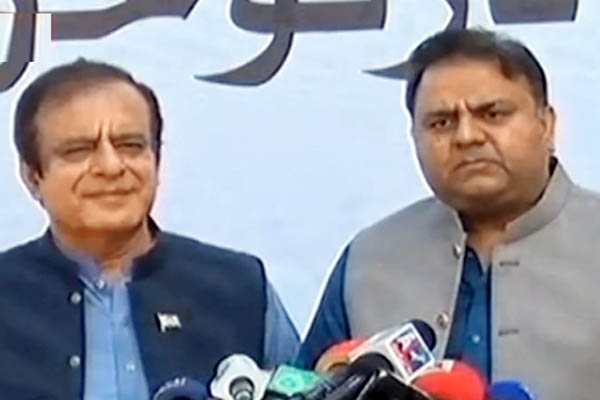 Addressing a press conference alongside Science and Technology Minister Fawad Chaudhry, he said that the Pakistan Democratic Movement—comprising 11 parties—had spent a month preparing for the rally but had only been able to attract 15-18,000 people. “They could not even fill the stadium,” he claimed, adding that the public had rejected their “personal vendetta.”

Faraz’s statement is an exaggeration, at best, as the Jinnah Stadium venue was clearly packed for most of the rally. However, because it ran past midnight, he is correct that the ground had started to empty out by the time it concluded.

The information minister advised the opposition to “learn” from this event, claiming that by making Jamiat Ulema-e-Islam (Fazl) chief Maulana Fazlur Rehman address empty seats, the opposition had proven they had no real plans or unity in their ranks.

Faraz also hit out at opposition leaders Bilawal Bhutto-Zardari and Khawaja Asif, who both raised questions over the alleged political influence wielded by Prime Minister Imran Khan’s wife, Bushra Bibi, in matters of governance, particularly in Punjab province. He claimed Bhutto-Zardari should avoid involving women in politics when they had no formal role in them and accused Asif of using indecent and inappropriate language.

Minister Chaudhry, meanwhile, claimed attracting thousands to an event in a city with millions proved the public had rejected the opposition. He did not make any mention of reduced capacity due to COVID-19 guidelines issued by the government; nor did he include the thousands who greeted the opposition leaders during their journey to Gujranwala.

The minister alleged several members of the PMLN had approached the PTI in recent weeks because they wanted to break away from the party over its “anti-state” narrative. He accused Pakistan Muslim League (Nawaz) chief Nawaz Sharif of “attacking the state” in his speech. While he did not clarify what he meant, it is likely he was referring to Sharif’s allegations that the security establishment ousted him and rigged the elections in Khan’s favor. In the speech, Sharif had stressed that he respected and saluted the armed forces but wanted all institutions to remain within their constitutional ambits.

Chaudhry claimed raising questions about state institutions—a common practice in any functional democracy—amounted to peddling the narrative of India. He also stressed that the Pakistan Army had rendered matchless sacrifices in the war on terror.

The minister said he had always disagreed with the government’s decision to allow Sharif to go abroad for medical treatment, adding that the government would ensure he was brought back to Pakistan to finish out his prison term.