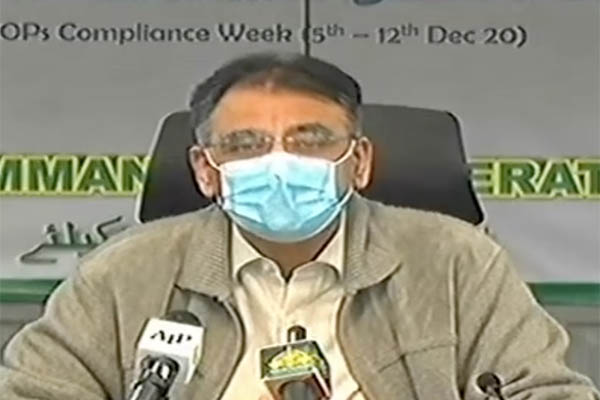 In light of a continuous decline in new infections of the novel coronavirus, the National Command and Operation Center (NCOC) has announced an extension to “stringent restrictions” in 6 “high-risk” districts to curb the spread of the pandemic. Earlier, the strict measures were applicable to 24 districts across Pakistan.

“We’ve seen an improvement in [the situation of] 18 districts,” Planning Minister Asad Umar announced on Tuesday. Noting that a previous notification had imposed harsh movement restrictions in 24 districts till Sept. 15, he said this was now being extended till Sept. 22 in just six districts “with some changes.”

The remaining districts that continue to report a high incidence of COVID-19 infections are Lahore, Faisalabad, Multan, Sargodha and Gujrat in Punjab; and Bannu in Khyber-Pakhtunkhwa. “While the majority of the previous restrictions would continue, there has been some easing [due to a visible decline in new infections],” he said.

Referring to recent media reports, Umar also noted that while there was sufficient oxygen supply in the country right now, it had come under immense pressure due to a surge in COVID-19 patients requiring critical care.

According to the minister, educational institutions would be allowed to reopen in the high-risk districts from Sept. 16, adding that this would be done in a staggered manner. “They [schools] would reopen with 50 percent attendance,” he said. Similarly, he said, intercity transport, which had been completely banned for the past week, would be allowed to resume operations with 50 percent capacity and compliance with SOPs. The third change, he said concerned outdoor dining at restaurants.

“We have extended the time for outdoor dining from the existing 10 p.m. to midnight,” he said. “However, indoor dining at restaurants [in these districts] would remain banned,” he added.

Further reductions in restrictions in the high-risk districts include permission for gyms and amusement parks to reopen for fully vaccinated people. “The amusement parks would operate at 50 percent capacity,” he said. On the issue of outdoor gatherings, which were completely banned earlier, Umar said they would be permitted for a maximum of 400 people. “Indoor gatherings will remain banned,” he said.

The restrictions that have not been reduced for the high-risk districts are: closure of all commercial activities—excluding essential services—by 10 p.m.; ban on visiting shrines; ban on all cinemas and contact sports; 50 percent attendance at public and private offices.

Umar stressed that while the fourth wave was on a decline, the threat of COVID-19 remained. “The threat has lessened; it has not yet completely passed,” he said, and urged all citizens to get fully vaccinated. “That is the only way to come out of this pandemic,” he said. “We want our economy to return to normal, but we must also ensure our public health is not impacted,” he added.

The minister stressed that the government had decided that it would not mandate business closures in future, adding that the plan going forward was to restrict the activities that were open to unvaccinated citizens. Summarizing previously announced deadlines, he said that Sept. 30 was the cut-off point for people to get fully vaccinated if they wanted to continue availing various services. “After Sept. 30—if you are not fully vaccinated—you would not be allowed to work in any educational institutions; travel by plane domestically or internationally; enter shopping malls as either a customer or employee; secure books at hotels/guest houses; attend wedding receptions or visit indoor or outdoor eateries,” he added.