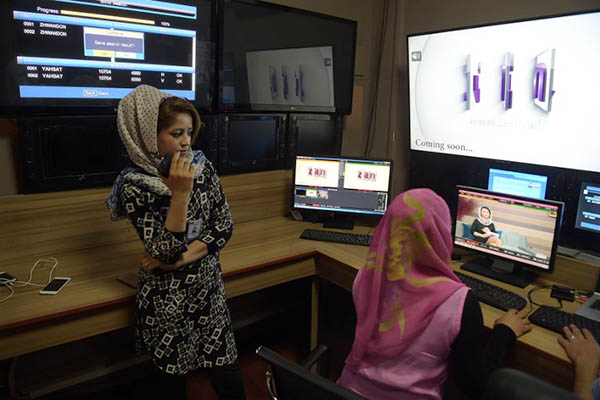 Afghan women are redrawing the media landscape in the deeply conservative country with the launch of a new magazine and a television channel, risking the anger of extremists by giving their gender a glamorous voice.

The teams behind the two privately-run projects have bold ambitions to use their mass media platforms to change attitudes and inform Afghans of their rights. But they know full well the dangers of such trailblazing ventures in a war-torn nation where many still believe that a woman does not belong outside the home.

“[The] lack of participation of women in life has made this country very violent,” said Sandjar Sohail, head of the Hasht press group behind the launch of Gelara magazine. “I am sure we’ll get some reaction, some complaints. We are expecting that,” he conceded.

The glossy monthly run by a team of women in their 20s proclaims itself proudly as “Afghanistan’s first fashion magazine.” It is also a 100 percent Afghan project.

Gelara—“the apple of the eyes” in Farsi, a colloquialism for something beautiful and precious—contains culture and celebrities, but aims for pedagogy. Beauty, cooking, health, literature: the magazine succumbs to feminine tropes, but also dives into issues such as family law reform, which has stalled in the Afghan parliament since 2008.

“This family law is so unfair for women… once they get married they have no rights. You have to push for women’s rights,” insists the editor-in-chief, 24-year-old Fatana Hassanazada, who heads a team of 14 young women.

Gelara’s first cover featured singer Mozhdah Jamalzadah, who posed bareheaded, her bold gaze staring directly into the camera. In an interview, the artist discusses criticism she has received for wearing costumes judged too tight. Afghan pop star and women’s rights activist Aryana Saeed underwent a similar deluge after a recent concert in Paris.

“Yes it’s risky. It’s always risky” in Afghanistan to fight conservatism and extremism, said Sohail, who also runs the country’s most popular newspaper, 8-Subh (8-Hours). “This is a life and death conflict,” he explained, adding they have no choice but to fight. “If not, the conservatives will bring us back, to a primitive life.”

Gelara, which sells for 100 afghanis ($1.30) in the street, is provocative—but only to a point. Though some heads remain unveiled, women’s bare legs and arms are rarely pictured.

Zan TV, or “Women’s TV,” will also aim to challenge traditional expectations of the female role in Afghanistan, when it begins broadcasting in the near future.

AFP visited its studios in a vast house in Kabul last month: there is a candy pink one for news; another is blue, the traditional interior for talk shows; while political broadcasts are conducted from a red sofa against a green background—echoing the Afghan flag.

Women are already on the air in Afghanistan and regularly present the news. But at Zan TV they will have power. Mehria Afzal, 25, the head of the political service, expects to be “the voice of Afghan women.”

“In the provinces, girls are exchanged like animals. It is forbidden, but they do not know their rights,” she asserts.

“This is the first time that we have launched a television project dealing with the issues of Afghan women, covering all subjects, allowing women to express themselves whether it is politics or religion,” says Malalai Zikria, the channel’s editorial adviser. “Every woman or girl who has something to say will be welcome,” she promises. Rape, harassment, contraception—all will be discussed, even the very sensitive question of virginity, she says.

But the presenters will wear their headscarfs, she says, underscoring the caution with which they are attempting to move forward. “We are in an Islamic country, we must respect the laws. We can be veiled and fight for his rights.”

“We need to be cautious and calculating [in] the steps we take not to hurt or confront the culture or tradition of Afghanistan,” said Hamid Samar, founder and director of Zan TV, who focuses on the urban audience.

Digital technology provides coverage throughout the country for the channel, which employs 70 people—an all-woman editorial staff, aged between 22 and 30, and a camerawoman.

The technical staff of 16 people is all male, said Samar, explaining that there is a lack of women trained in such areas. But he hopes that will change, adding that the company policy is still that “all the staff should be women.” He also wants to reach a male audience, but to make a difference as they do so. “Hopefully husbands and wives will watch us together, but the women will actually [have] control of the remote control.”