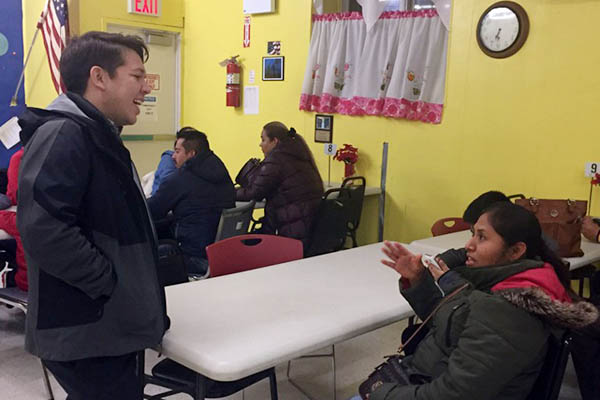 Illegals hope to legalize their migratory status ahead of president-elect’s inauguration in January.

If I get deported, can my 18-year-old son take care of my youngest child? What should I do if an immigration agent knocks on my door? Do I have the right to a Spanish-speaking lawyer? These were some of the questions raised by undocumented migrants who met recently at a community center to prepare for the worst after Donald Trump’s surprise Nov. 8 presidential election victory.

The Republican, who launched his White House quest denouncing Mexican immigrants as “rapists” and drug traffickers and vowing to build a wall on the southern U.S. border, has threatened to deport millions of undocumented migrants, starting with those with criminal records. “We still have two months to get organized,” said Mexican-born Gonzalo Mercado, the director of the La Colmena community center who organized the event in Staten Island, New York’s most conservative borough. “We don’t want to instill fear, but we must prepare for the worst because we don’t know what’s going to happen,” he told the group.

About 40 undocumented immigrants turned out for the late night meeting, anxious about what the future holds. They are not alone. The Mexican consulate in New York has been flooded with requests for appointments from nationals seeking to legalize their migratory status.

The waiting list for an appointment at New York Mayor Bill de Blasio’s office is now four to five months long, despite the Democrat’s promise to fight for the rights of the city’s undocumented residents.

Cesar Vargas, a young lawyer who is himself undocumented, has drawn up an eight page emergency action plan for undocumented immigrants, which was handed out to the crowd at La Colmena. The plan includes practical advice.

Only open your door to immigration agents if they have an arrest warrant, it advises. Remain silent if detained, find out who is asking for your detention, don’t sign anything without first consulting a lawyer, and request bail. Migrants were urged to write down passport and contact information for their relatives, as well as any medical insurance, bank, vehicle and home insurance information. Keep it in a secret place, they were told.

Vargas also advised parents to prepare a notarized document appointing a legal guardian for their children if they themselves are deported, to prevent minors from falling into the hands of the state.

Claudia, a 39-year-old Mexican immigrant who works as a housekeeper, came to the meeting with her husband and one of their two U.S.-born children. Would her 18-year-old son be allowed to take care of her 10-year-old? she asked.

Vargas’s brother Carlos, an adviser on immigration matters for the Borough of Staten Island, told Claudia he thought so, but wasn’t sure. Claudia, who would not give her last name, said her biggest worry was that her husband, a day laborer, would not be able to provide for the family.

“For example, there are companies that now won’t hire people without papers,” she said.

Trump’s election was traumatic for Jovita Mendoza, a 40-year-old single mother who has lived in the United States for 17 years, working two jobs and paying U.S. taxes on both. “I began to cry when I spoke to my sons. I told them that if they kick me out they’ll have to study hard, that they shouldn’t worry about me.”

Her eldest son consoled her, telling his mother that if Trump is true to his word “we’ll stay together.”

Vargas said he and other activists are compiling a list of lawyers who are willing to represent detained undocumented migrants for free in an emergency. About a half million undocumented immigrants, most of them Mexican, live in New York, America’s most diverse city. It is one of several U.S. cities that have promised undocumented migrants “sanctuary,” directing city workers not to cooperate with federal immigration enforcement.

But Vargas urged those in the audience to take the promises of official support with a grain of salt, noting that De Blasio is running for re-election next year. “Right now the mayor and the governor have pretty words to say, because 2017 is an election year,” he said. “We want actions to be put behind their words.”

Vargas, who came to the United States as a child and managed to get a law degree that allows him to practice despite being undocumented, promised an offensive strategy “starting Jan. 20,” when Trump takes office as president.

Vargas also urged the migrants to denounce any racist incidents they may encounter in public, in stores and at schools. Such cases appear to have increased since Trump’s election. Several people in the group complained about an elderly American known to chase down teens and adults in his car while yelling “Go back to your country!” and “Immigrants don’t belong here!”