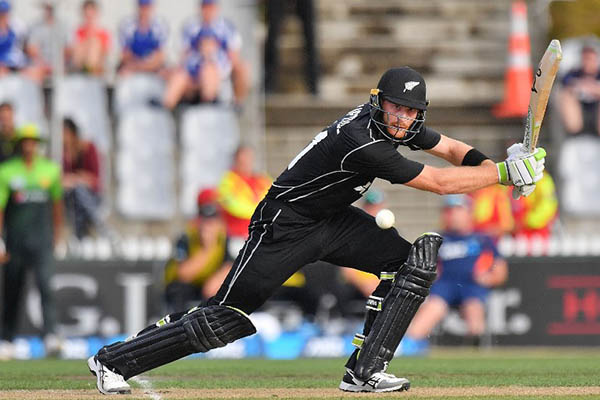 Martin Guptill belted New Zealand to an eight-wicket win over Pakistan in a rain-shortened second one-day international in Nelson on Tuesday.

Guptill blasted 55 off 31 balls after the rain break to be unbeaten on 86 as New Zealand reached their revised target of 151 in 25 overs with seven balls to spare.

Pakistan, boosted by a late run charge from Hasan Ali and Shadab Khan, made 246 for nine in their 50 overs and New Zealand were 64 for two after 14 overs in reply when the rain set in. Under the Duckworth-Lewis revision, New Zealand had 11 overs to make a further 87 runs when play resumed.

Guptill’s whirlwind knock included five fours and five sixes while Ross Taylor, keen to yield the strike in their 104-run stand, had only four boundaries in his 45 off 43 deliveries.

Pakistan did have early success with the ball, removing Colin Munro in the first over without scoring and Kane Williamson for 19 to have New Zealand at two for 47 in the 10th over. But the Pakistan bowlers were not allowed to settle when the weather cleared as Guptill and Taylor pounded the boundaries.

After Pakistan won the toss and elected to bat they recovered from an early collapse they recovered to reach 246 on the back of half centuries by Mohammad Hafeez (60), Shadab Khan (52) and Hasan Ali (51).

Mohammad Hafeez held the first half of the innings together while Hasan and Shadab mounted a late rescue mission when Pakistan were 141 for seven.

The pair featured in a 70-run partnership off 49 deliveries for the eighth wicket, which included 21 off one over by Todd Astle.

Lochie Ferguson was New Zealand’s chief wicket-taker with three for 39.