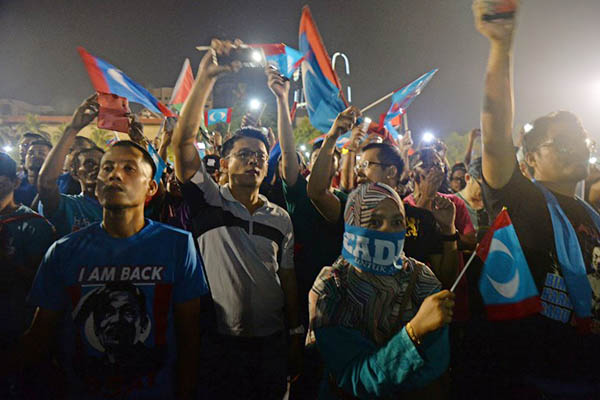 For young Malaysians, electing a 92-year-old to lead their nation was their only choice

Like many young Malaysians, Daniel Mizan Qayyum yearned for change in a country that has been under one party’s corrosive thumb for six decades, so he naturally had misgivings about voting for a 92-year-old former autocrat.

But Malaysia’s rambunctious politics often creates unlikely allies, and Daniel is one of millions who catapulted the elderly Mahathir Mohamad to a shock victory in the May 9 elections over the corruption-plagued political machine that he once led. They had no choice.

“We were revolted,” Daniel, a 27-year-old law student, said of Mahathir’s late conversion into a reformist. “This guy was the one who strong-armed all the draconian laws,” he said, referring to Mahathir’s tough stance toward dissent during his 1981-2003 tenure.

But Daniel and other young voters held their noses and voted, convinced that anything was better than the long-ruling former regime.

The untested Pakatan Harapan (Pact of Hope) coalition now faces the challenge of delivering on rising expectations for a new era, even while conservative attitudes and vested interests remain strong in the Muslim-majority country. And above it all looms Mahathir and his track record of crushing opponents. He now claims to be a changed man and says he plans to step aside within two years.

“For any new government it is very important to manage expectations. You must be seen to be starting the processes of reform and doing things like reducing cost burdens,” said Wong Chin Huat, a political analyst with the Penang Institute. “I think enough can be done to keep young voters happy, but expecting wholesale changes in the next two years is unrealistic.”

More than six million of Malaysia’s 14.9 million registered voters are between 21 and 39 years old. Detailed figures on how they voted have not been released, but analysts believe the demographic was decisive in ousting BN.

For some, their demands are clear.

Daniel, a student leader at Universiti Malaya, is one of many calling for Mahathir’s government to quickly fulfill a pledge to replace a decades-old law restricting political activity on campuses, which has stifled a generation of students. “The real struggle is to make sure that any new law erected by the current government limits their own powers in universities,” he said.

Anis Syafiqah, who works for a leading civil-society group that has led past student protests demanding Najib’s arrest, also wants education revitalized and academic freedom ensured. “Youths and students were afraid to speak out before,” said Anis, 26. “We want to come back to academic freedom. It may take a long time.”

Others may also seek greater space or attention, from the LGBT community to Chinese and Indian minorities that have spent decades under Malay political domination, to economically disadvantaged groups.

Travel consultant Tan Jin Jie, 24, said he almost didn’t vote because of Mahathir, and believes Malaysians should temper their expectations for now. “How practical would it be, or how long would it take, for the new government to set Malaysia back onto the right path?” he said. “These are uncertainties but we hold onto hope that this will come to pass.”

“It goes back to what we Malaysians actually want. To continue struggling under the incumbent regime or vote for hope,” said Tan, who wants to see steps to ease living and housing costs.

Much depends on whether Mahathir will be able to work with Anwar Ibrahim. Anwar was Mahathir’s deputy prime minister until a spectacular falling out saw the premier oust and jail his protégé in 1998.

Later, Anwar united the opposition against BN, until Najib’s government jailed him in 2015. But Mahathir engineered Anwar’s release last week and has indicated he will eventually give way to him, a pledge that no doubt enticed many young voters to back Mahathir in the polls.

But Anwar himself is now 70, and admitted after his release that he’ll need to learn how to use a smartphone.

So young Malaysians shouldn’t just sit and wait for change, said Fahmi Reza, a graphic artist and activist. With his signature shoulder-length hair and black beret, Fahmi became a public hero with his viral images depicting Najib as a sinister clown, which earned him a criminal conviction for violating multimedia laws. “Don’t wait for change. You be the change,” he said. “Whatever change you want… do it now.”