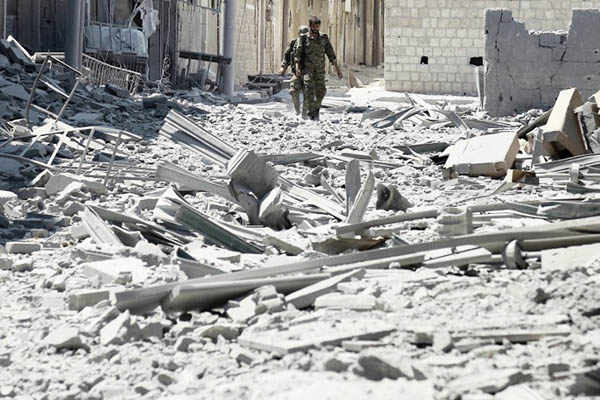 The U.S.-led military effort against the Islamic State group started exactly two years ago, aimed at halting the jihadists as they swept across Iraq, leaving a trail of human butchery and destruction in their wake. It was supposed to have been a swift and narrow campaign that would help local forces deal a “lasting defeat” to I.S. jihadists. But billions of dollars and more than 14,000 airstrikes later, such assertions are buckling, and the campaign highlights the limits of fighting a war mainly from the skies.

“I think we are looking at decades of effort,” said Charles Lister, a senior fellow at the Middle East Institute. “We are fighting a losing battle if we expect to completely destroy [I.S.] altogether.”

Nearly half of the territory once held by the I.S. group in Iraq has been liberated, as well as about 20 percent of its claim in neighboring Syria. Experts foresee the eventual collapse of the group’s self-declared “caliphate,” but the jihadists are fighting back by calling on followers to launch attacks across the globe.

Just this year, I.S. has claimed a string of horrific attacks including in France, Belgium, Turkey, Baghdad and the United States. “This is an organization that has very successfully morphed back into a traditional terrorist organization that then steadily rebuilds its capabilities,” Lister said.

When President Barack Obama launched airstrikes in Iraq in August 2014, officials stressed U.S. involvement would not be sustained for the long term. And Obama, elected on a promise of ending America’s wars in Iraq and Afghanistan, vowed ground troops would not be dragged back into another conflict.

He has repeatedly insisted that while the United States can provide support and airstrikes, the war has to be won by local forces—not Americans. Still, about 6,500 coalition troops, mostly American, have deployed in the anti-I.S. fight.

Most are in Iraq, though some special operations forces are working with Kurdish and Arab fighters in war-torn Syria, where a civil war and Russian strikes in support of President Bashar al-Assad have further complicated the picture.

“The few people of us who were watching this group develop from 2010 to 2014 knew very well that this was going to be a very long-term battle, and the idea that no U.S. troops were going to be involved was just a fantasy,” Lister told AFP.

Though the United States claims more than 60 countries are part of its coalition, in reality America and just a few stalwart partners are carrying out almost all the work. Within weeks of the first strikes in Iraq, the coalition campaign spread to Syria.

The fight later expanded to Afghanistan and, last week, the Pentagon quietly started an air campaign in the I.S. group’s Libyan stronghold of Sirte. That campaign is supposed to last “weeks, not months,” according to the Pentagon.

Coalition strikes have targeted jihadi leaders, foot soldiers, tanks and fighting positions. Fuel trucks and wellheads that supply illicit oil for the I.S. group have been blown up too, along with hoards of cash worth millions of dollars.

But such reliance on airstrikes has created new problems, with the campaign’s quickening pace leading to increasing numbers of civilians being killed. As of July 28, the Pentagon had confirmed 55 civilians killed in coalition strikes in Iraq and Syria. Critics say that is an underestimate.

Other incidents are under investigation, including a July strike near the Syrian city of Manbij in which dozens more civilians were allegedly killed.

Though the United States goes to great lengths to avoid such deaths, they have disastrous repercussions for the wider fight against I.S. jihadists, observers note. “With the bombing campaigns, you are going to kill innocents, you are going to drive more recruits and you are going to drive more sympathy,” said Howard Gambrill Clark, a Marine veteran and former senior intelligence analyst who now heads the Washington-based Stability Institute. “I don’t know any serious [counterterrorism] analyst that believes that the U.S. is doing anything but creating more violent extremists,” he said.