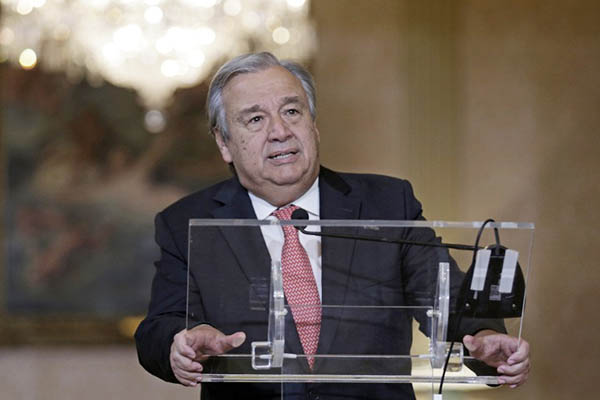 In news briefing, Antonio Guterres urges Pakistan and India to ‘seriously’ discuss the dispute and de-escalate situation at Line of Control

A military confrontation between Pakistan and India would be a “disaster of unmitigated proportions,” U.N. Secretary-General Antonio Guterres said on Thursday, as he urged the neighboring nations to resolve the Kashmir dispute through dialogue.

Addressing his first news briefing of 2021 in New York, the U.N. chief lamented that ties between Islamabad and New Delhi had become worse in recent years. “Now, things have not moved in the right direction. Our good offices are always available, and we will insist within it on finding peaceful solutions for problems that have no military solution,” he said.

“It is clear, when seeing Pakistan and India, any military confrontation between the two would be a disaster of unmitigated proportions for both countries and for the whole world,” he warned to a question by an Associated Press of Pakistan correspondent, which had referred to a statement from August 2019 that had called for a resolution to the Kashmir dispute in accordance with relevant U.N. resolutions and the global body’s charter.

Ties between Pakistan and India have been at an all-time low since August 2019 when India unilaterally abrogated the special constitutional status of Jammu and Kashmir and imposed a communications blockade that still continues to this day. Pakistan responded by downgrading its diplomatic relations with India and expelling the Indian high commissioner. India, however, maintains that merging Kashmir into the federation is an “internal matter.” Islamabad has stressed, at various international forums, that India is committing serious human rights abuses in the disputed territory and urged the global community to pressure it for restraint.

“Well, what I said in the statement you mentioned is, unfortunately, the same that I can say today … I do believe that it is absolutely essential to have a de-escalation of the situation, namely in the Line of [Control],” said Guterres. “I think it’s absolutely essential for the two countries to be able to come together and seriously discuss their problems, and I think it’s essential that human rights are fully respected in all territories that you mentioned,” he added.

In August 2019, the U.N. chief had issued a statement calling for the U.N. Security Council’s resolutions to be effectively implemented for de-escalation along the LoC. He had also urged Delhi to refrain from taking any actions that altered the status of Jammu and Kashmir.